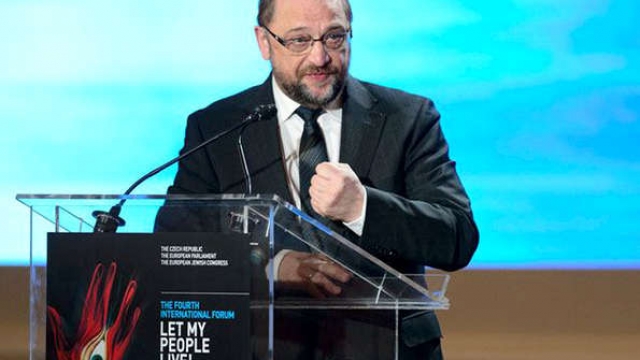 When officials at the European Jewish Congress (EJC) planned the “Let My People Live” conference that took place in Prague on January 26th and 27th, they had no idea how topical it would turn out to be. The conference, which included commemorations at the former Nazi concentration camp of Terezin, sought to bring attention to rising intolerance in Europe, including anti-Semitism as well as prejudice against Roma, Muslims, gays and other groups. The terrorist attacks in Paris this month have lent the issue a sudden urgency; Jean-Claude Juncker, president of the European Commission, and Martin Schulz (pictured), president of the European Parliament, attended the conference and delivered the expected paeans to tolerance. But as the aftermath of the Charlie Hebdo attacks showed, different people have different ideas of what tolerance entails. For some at the conference, it meant both respect for other groups and a liberal openness to free speech, even offensive speech. For others, including the conference’s organisers, it meant enabling governments to block speech (such as the cartoons published by Charlie Hebdo) that offends or stigmatises particular groups.

The centrepiece of the conference was a framework statute for the promotion of tolerance, developed by five international lawyers under the aegis of a group called the European Council on Tolerance and Reconciliation (ECTR). (The group has close links to the EJC: Vyacheslav Moshe Kantor, the Russian emigré billionaire who heads the EJC, co-founded the ECTR in 2008.) The statute aims to serve as a model for European legislatures in passing laws against incitement to discrimination and hatred. It would criminalise “group libel”: “defamatory comments made in public and aimed against a [religious, ethnic, sexual etc.] group…with a view to inciting to violence, slandering the group, holding it to ridicule or subjecting it to false charges.” It also makes governments responsible for ensuring that different groups in society are tolerant towards each other, and lays out circumstances in which governments can bar religious or ethnic practices that are themselves intolerant.

This agenda is sharply at odds with the liberal philosophical tradition, embodied for example in the American constitution’s first amendment, of protecting free expression (however offensive) unless it directly incites violence. But Yoram Dinstein, the Israeli professor of international law who led the drafting of the model framework, says it is American jurisprudence that is out of step: “The United States is entirely isolated in its extreme views as regards the first amendment. All the other countries in the world, from Canada to Australia and Britain, take a different position.” One ought not be tolerant of intolerance, he argues; history shows that demonisation of minority groups leads to oppression or even genocide, and given that governments already limit freedom of speech, there should be common principles guiding the limits.

Mr Dinstein was the only Jewish member of the legal team that drafted the framework. The rest hailed from Austria, Estonia, Germany, and Italy. A history of xenophobic political agitation leading to violence has led many European countries to criminalise offensive speech in one form or another. Nevertheless, the notion of restricting freedom of expression to enforce tolerance proved highly controversial at the Prague conference. In a panel discussion, Alan Dershowitz, an American law professor, faced off against Mr Dinstein, arguing that “the great test of a democracy is to to be tolerant to the intolerant.”

One defender of the proposed restrictions on speech was Vladimir Yakunin, the Russian oligarch and ally of Vladimir Putin, who unexpectedly appeared on a panel after a last-minute cancellation by Christiane Amanpour of CNN. Mr Kantor also has longstanding links with Mr Putin, a fact which made his election as the EJC’s president in 2007 controversial. (At the Prague conference, Mr Kantor called the Russian president “the biggest defender of Jews in Russia”.) At times, as with the commemoration ceremonies at Auschwitz this week, the escalating conflict between Mr Putin and the European Union threatened to overshadow the topic at hand. Geopolitical divisions reared their head again over a rather anodyne joint statement against anti-Semitism produced at the end of the conference, which Turkey refused to sign.

As for the potential impact of the draft framework for tolerance on European freedom of expression, little will happen for now. The European commissioner for justice, Vera Jourova, diplomatically called the proposal “interesting”, but there was no eagerness among the politicians attending the conference to adopt it in their own countries. One Spanish member of the European Parliament noted that Spain already has laws, adopted during the struggle against ETA, the Basque separatist movement, which criminalise the group’s political activities as well as its terrorist ones. But he doubted that any broad cross-country framework for such laws would be useful. Europe’s restrictions on free expression may not be going anywhere, but they are likely to remain ad hoc and incoherent, rather than becoming part of a grand strategy by states to outlaw intolerant speech.