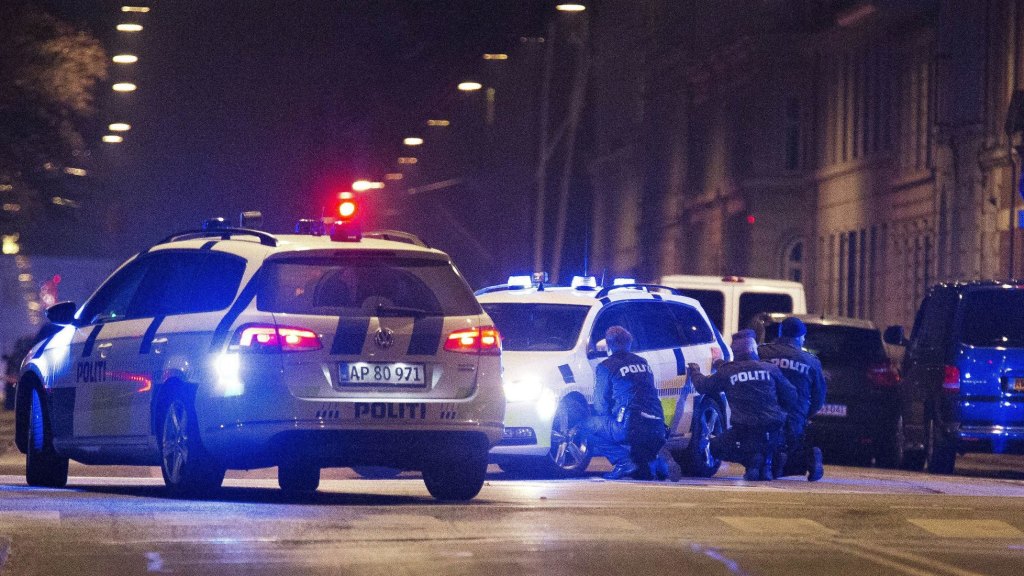 Danish police announced that the man was 22-year-old Omar al-Hussein, born and raised in Denmark.

The killings, coming little more than a month after bloody Islamist attacks in Paris that left 17 people dead, were described by Danish Prime Minister Helle Thorning-Schmidt as “a cynical act of terror”.

Al-Hussein was shot dead after he opened fire on police at a railway station, a spokesman said.

His death came after a 55-year-old man was killed on Saturday at a panel discussion about Islam and free speech, which was attended by the Swedish cartoonist behind controversial caricatures of the prophet Muhammad.

In the second attack, a Jewish man was killed and two police officers were wounded outside Copenhagen’s main synagogue early on Sunday.

Five police officers were wounded in the two attacks.

“We believe the same man was behind both shootings and we also believe that the perpetrator who was shot by the police action force at Noerrebro station is the person behind the two attacks,” Torben Moelgaard Jensen told a press conference.

The first lethal attacks on Danish soil in decades were branded “deplorable” by the United States and triggered condemnation around the world.

Lars Vilks, whose cartoons of the prophet Muhammad sparked worldwide protests in 2007, had been among the speakers at the Krudttoenden cultural centre when a man opened fire on Saturday.

The killing of the suspected perpetrator capped a massive police manhunt launched after the gunman fled following both shootings.

The shootout took place shortly before dawn in the inner-city neighbourhood of Noerrebro, where police had been keeping an address under observation.

Police said video surveillance had led to them to believe that the man killed by law enforcers was behind both attacks, but that a large amount of considerable investigative work would be required to ascertain that he was not acting with others.

The shooting came at the end of a night of fear that had gripped the city of about a million, which had been spared major attacks in recent years.

The central area of Copenhagen that is home to both the synagogue and Noerreport station, the country’s busiest rail hub, was cordoned off by police carrying machineguns.

Swedish security services told AFP they were on alert for any attempt by a suspect to cross the bridge linking Denmark with Sweden.

Michael Gelvan, chairman of the Nordic Jewish Security Council, told AFP the victim at the synagogue was a young Jewish man who had been providing security for a ceremony.

The windows of the cultural centre were pockmarked by bullet holes, and the BBC released chilling audio of the moment a speaker at the event was interrupted by a volley of gunshots.

French President Francois Hollande said the “same targets” were hit in weekend attacks in Copenhagen as during the January assault in Paris that claimed 17 lives.

“It was the same targets that were chosen by the terrorists”, Mr Hollande said during a visit to the Danish embassy in Paris on Sunday.

“We see there is a link that doesn’t show there is a network but does show the terrorists are determined to hit what we are, what we represent, the values of freedom, of law, of protection that every citizen – whatever his or her religion – should have,” he added.

Denmark and France are both in mourning but with the “same desire to resist and to overcome terrorism”, Mr Hollande vowed, as he expressed his country’s “solidarity” with Copenhagen.

Earlier, France’s ambassador to Denmark Francois Zimeray, who was present at the debate but was unhurt, told AFP the shooting was an attempt to replicate the January 7 attack on the Charlie Hebdo satirical magazine in Paris, which killed 12 people.

“They shot from the outside [and] had the same intention as Charlie Hebdo, only they didn’t manage to get in,” he said.

“Intuitively I would say there were at least 50 gunshots, and the police here are saying 200,” he said.

“Bullets went through the doors and everyone threw themselves to the floor.”

Police initially said two suspects had fled the cultural centre in a Volkswagen Polo. The car was found abandoned about two hours after the attack.

Before the presumed attacker was shot dead, the Danish Prime Minister said: “Everything leads us to believe that the shooting was a political attack and therefore a terrorist act.”

The shootings come at a time of heightened security and rising fears of Islamist violence in Europe.

Dozens of suspected jihadists have been arrested across Europe since mid-January and stocks of weapons and explosives have been uncovered.

Vilks has been living under police protection after his cartoons prompted death threats.

Charlie Hebdo columnist Patrick Pelloux voiced dismay over the attack at the debate Vilks had been attending, saying: “We are all Danish tonight.”

He urged artists not to succumb to self-censorship out of fear, telling AFP: “We must stand firm and not be afraid.”

The United States on Sunday condemned the deadly weekend attacks in Copenhagen at a free speech event and a synagogue and said it stood with Denmark and others in defending freedom of speech and opposing anti-Semitism.

“The people of the United States stand united with the people of Denmark and all others who defend the universal right of freedom of speech and stand against anti-Semitism and bigotry in all its forms,” the State Department said in a statement.

“Jews deserve protection in every country, but we say to Jews, to our brothers and sisters: Israel is your home,” he said. “We are preparing and calling for the absorption of mass immigration from Europe.”

Mr Netanyahu made similar statements about immigration after the Paris shooting, saying Israel would welcome European Jews who chose to emigrate for safety reasons.

He has already asked the cabinet to back a multimillion-dollar plan to absorb new immigrants from France and Belgium, where safety concerns rose after attacks on Jewish targets by Islamist militants, and from war-ravaged Ukraine.

After the shooting in Denmark, Moshe Kantor, the leader of the Brussels-based European Jewish Congress, said European governments weren’t doing enough to protect their Jewish communities against militants.

The attack “demonstrates that defensive measures to protect the public, and the Jewish community in particular, are not enough”, Mr Kantor told Bloomberg by email.

“The authorities must change the paradigm and take the battle to the radical Islamist enclaves, prevent the next attack and bring the terrorists and their supporters to task.”