Jewish Groups On Copenhague Attacks: ‘Anti-Semitism Is At The Core Of Islamic Extremist Ideology’, ‘Time For Europe To Wake Up Before It’s Too Late’ 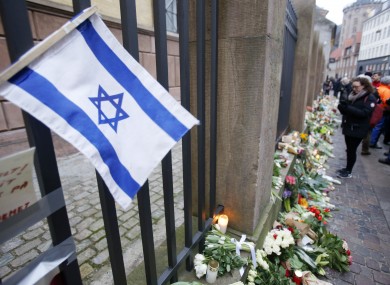 ’Again Jews in Europe are being targeted by brutal terrorists who have nothing in their hearts other than blind hatred,’’ declared Sunday Vadim Rabinovich, Co-Chairman of the European Jewish Parliament.

‘’Extreme ‘Muslims’ are challenging our very existence in Europe, as well as the Western values and structures of which we are a part,’’ he added in a reaction to the attack the Great Synagogue of Copenhague in which Dan Uzan was killed while guarding the site where a bat-mitzvah was taking place. The attack on the synagogue came hours after the terrorist targeted a meeting in the city about freedom of expression and Islam. One person was killed in this attack.

‘’I believe we have to hold the leaders of the EU and the leaders of European countries accountable for the Jewish fatalities and wounded. We demand tougher rules, tougher security measures and significantly tighter law enforcement,’’ Rabinovich said, stessting that ‘’it’s time for Europe to wake up before it is too late.’’

‘’This is in effect a campaign to save Europe, its values and way of life; campaign for the future of Europe. The EU and European political leaders throughout the continent should lead this campaign. We are ready to help.’’

He said Jews should build stronger bridges with the moderate Muslim leaders in Europe to encourage them ‘’to do more in protecting their own youth from being drifted into the realms of the hate preachers and terrorists.’’

The Simon Wiesenthal Center released a statement condemning the attacks and calling for global action against “Islamic terrorism.”

“The Copenhagen attacks follow the Charlie Hebdo and Hyper Casher Islamist terrorist outrages in Paris. It is time for world leaders to acknowledge that this scourge has a name: Islamist Terrorism”, said the Center’s leaders, Rabbi Marvin Hier and Rabbi Abraham Cooper.

“It is time for the civilized world led by the US to tackle the scourge of Islamist fundamentalism that threatens peace- loving people of all faiths, as our freedoms of expression and worship are under assault the world over,” they said.

The Anti-Defamation League (ADL) said the shootings in the Danish capital “should serve as another wake-up call to all of Europe” to the continued clear and present danger posed by individuals motivated by radical interpretations of Islam.

‘’This latest attack, apparently motivated by anti-Semitism and radical Islamic extremist ideology, is another assault on democracy and free society. It should, and indeed it must, serve as another wake-up call to all of Europe. What kind of madness is this when a Jewish community cannot celebrate a bat mitzvah without fear of attack?,’’ said ADL’s National Director Abraham H. Foxman.

‘’The attacks in Copenhagen are tragic reminders that Islamic extremists target Jews and democratic freedoms together. As with the recent terror attacks in Paris, once again we see that anti-Semitism is at the core of Islamic extremist ideology. This link has not been sufficiently understood throughout Europe, despite the Paris attacks,’’ he added.

‘’With Jews in the crosshairs, there is an urgent need for European leaders to act quickly and effectively to ensure their safety,’’ Foxman said.

A recent ADL poll in Denmark found relatively low levels of anti-Semitic attitudes among the general population. According to the ADL Global 100 Survey, fielded in late 2013 and early 2014, only 9 percent of adults harbor anti-Semitic attitudes in Denmark, the same level as found in the United States and one of the lowest findings in Western Europe.

European Jewish Congress President Moshe Kantor urged European authorities ”to go on the offensive against radical Islamists, if they are to stand any chances of beating back the terrorist wave spreading across Europe.”

“Last night’s terrorist attack on a synagogue in Denmark demonstrates that defensive measures to protect the public, and the Jewish community in particular, are not enough,” he said. “The authorities must change the paradigm and take the battle to the radical Islamist enclaves, prevent the next attack and bring the terrorists and their supporters to task.”

“Islamic terrorists are targeting Jews specifically in their homes, markets, places of business and houses of worship. Unless serious action is taken to prevent these attacks every Jew in Europe is at risk. To win this war on terror and anti-Semitism, European authorities must immediately establish a pan-European task force with legal authority and significant budgetary resources dedicated to stopping this threat. Intelligence gathering, surveillance and protection must be amassed and shared by all nations and terrorists needs to be hunted down before they act. Now is the time for all EU member states to act swiftly and effectively.”

“The wave of anti-Semitism which is sweeping the continent is becoming more and more violent and endangers Jewish existence. The threats against Jews and the inability of governments to defend them are forcing Jews out of Europe,” Kantor said.