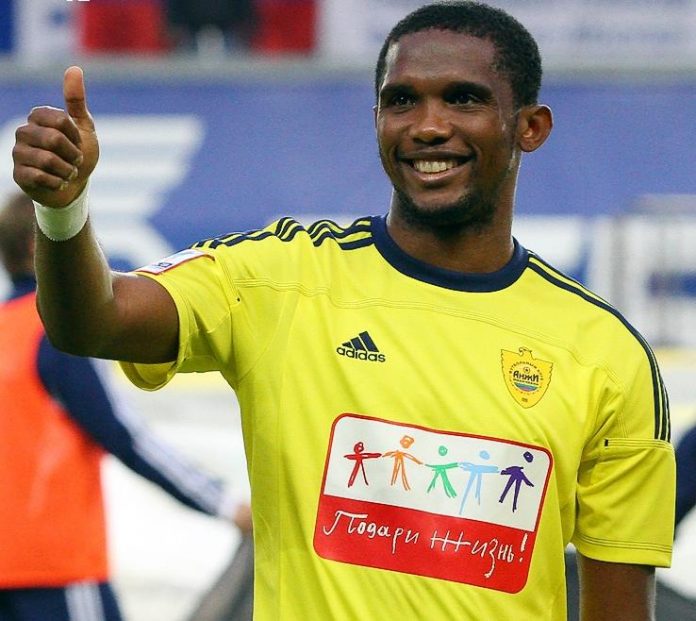 In the Face of Growing Wave of Racism and Antisemitism in Football, Samuel Eto’o to be Awarded the European Medal of Tolerance

On Monday, 9 th March 2015, at a star-studded gala event at Kensington Palace, former FIFA World Player of the Year Samuel Eto’o and the FARE Network, an anti-discrimination and social inclusion network that counters inequality and exclusion in football, will be awarded the Third European Medal of Tolerance by the European Council on Tolerance and Reconciliation (ECTR).

The ECTR is a non-governmental organization comprised of former world leaders and other senior public figures. Dr. Moshe Kantor, President of the ECTR, said that the award was to honor and reward the promotion of tolerance and reconciliation.

“As we have witnessed recently with the actions of Chelsea and West Ham fans, and also other events throughout Europe, such as Nicholas Anelka and others making the ‘Quenelle’ gesture, racism and Antisemitism are still very much alive and well in Football. It is important at this worrying time to send a clear message that racism has no home in football,” Dr. Kantor said.

“Samuel is being awarded the Medal of Tolerance because of his personal leadership and devotion to combating manifestations of racism and intolerance. Personally a victim of many racist incidents, he has found the courage and will to stand against the racists, building awareness and inspiring fellow footballers and millions of football fans.” Kantor added.

“The FARE Network has taken a bold stand against discrimination and challenges racism in an active and practical manner.”

The award ceremony is taking place amid a time of rising racism, xenophobia and Antisemitism, both in general, like the recent deadly terrorist attacks in Paris and Copenhagen, and more acutely surrounding football. Recent footage showing Chelsea supporters proudly denying a black man the ability to get on a train in Paris and West Ham supporters singing anti-Semitic songs as they travel through Stamford Hill, an area known for a sizeable Jewish community, are just two recent examples of hate and intolerance by fans. Elsewhere, black players and players of color are regularly taunted in places like Italy, Holland and Spain, where last year a banana was thrown at Barcelona player Dani Alves who famously proceeded to eat it, and only last month when a match was suspended in Rotterdam after an inflatable banana was thrown at Roma’s Ivorian striker, Gervinho.

Additionally, on the field, former West Bromwich Albion player Nicolas Anelka made the ‘Quenelle’ , a reverse Nazi salute made famous by Dieudonne, an anti-Semitic French comedian, and in the boardroom, where Wigan Athletic Chairman Dave Whelan was caught making anti-Semitic comments, demonstrate that racism and Antisemitism are not just found on the stands.

“The last year has been a particularly challenging one for football in terms of hate and racism,” Eto’o said. “As players, we need to take a moral stand because we are the people the spectators watch and we have to be a strong example of tolerance in a multi-racial society which I believe football can represent best.”

“Football has the ability to be a unifier rather than a divider and we should have a strong stand against hate, Antisemitism and racism as players and above all as human beings.”

The first recipient of the European Medal of Tolerance was His Majesty Juan Carlos I, the King of Spain and the second Medal was presented to the President of Croatia Ivo Josipović and the former President of Serbia Boris Tadić.