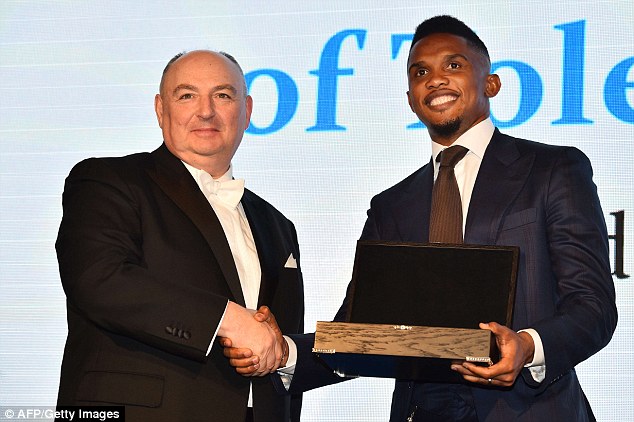 Former Chelsea striker Samuel Eto’o called for racist soccer fans to feel the full weight of the law as he returned to London on Monday to collect an award for his stance against intolerance.

The Cameroonian striker, who has been singled out for racial abuse during his career, said he had been shocked by video footage last month showing a group of Chelsea fans preventing a black man boarding a metro train in Paris.

‘I was shocked when I saw those images, but fortunately Chelsea has millions of fans worldwide,’ African football’s most decorated player said at the presentation at Kensington Palace in London.

‘These five or 10 fans are not representative of all the other fans,’ added the four times African player of the year and twice African Nations Cup winner.

Eto’o, now playing for Sampdoria in Italy, was awarded the European Medal of Tolerance by the European Council on Tolerance and Reconciliation (ECTR), a non-governmental campaigning organisation.