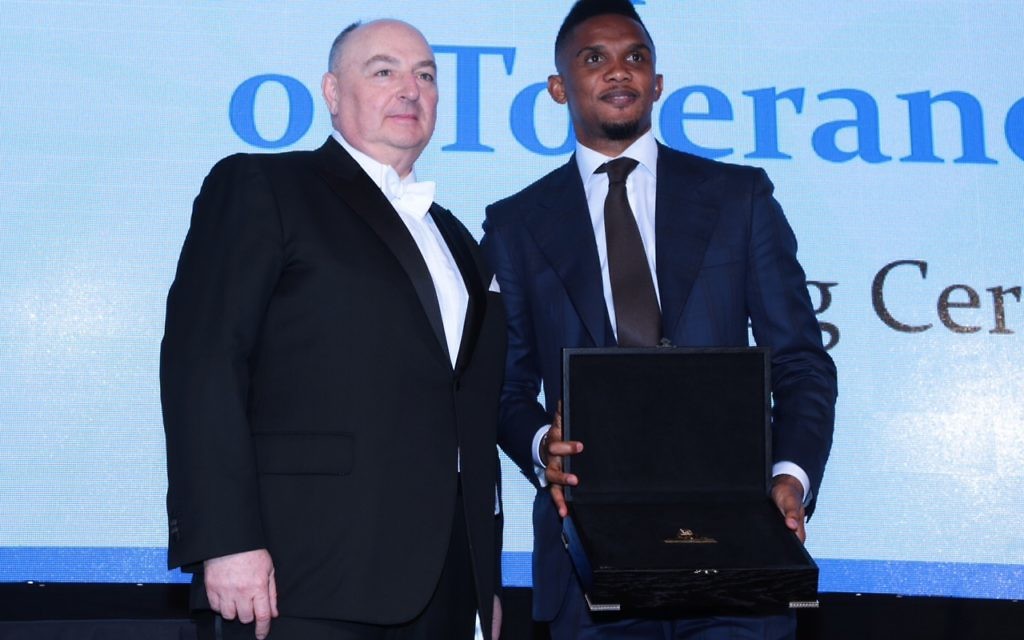 Former Barcelona and Everton striker Samuel Eto’o has called for a united front against anti-Semitism in football as he accepted an award for his efforts in standing up to racism at a glittering ceremony at Kensington Palace.

The four-time African player of the year was presented with the European Medal of Tolerance by an organisation working to foster understanding between communities and promote reconciliation.

Eto’o – who currently plays for Italian side Sampdoria – was among several high-profile players who faced racist abuse including money noises while playing in Spain. The abuse became so bad that he threatened on one occasion to walk off the pitch in 2006, later speaking about his decision to keep his family away from football stadia and demanding action before verbal taunts led to physical attacks.

In front of an audience that included fellow stars such as Eden Hazard, he recalled the day he took a stand against hate and how he was backed by his team. “It was that day I discovered the best way is to stand up and shout . That day I decided I’ll fight in stadia and outside”.

“Football has the ability to be a unifier rather than a divider and we should have a strong stand against hate, anti-Semitism and racism as players and above all as human beings,” he said ahead of the ceremony.

“The last year has been a particularly challenging one for football in terms of hate and racism. As players, we need to take a moral stand because we are the people the spectators watch and we have to be a strong example of tolerance in a multi-racial society which I believe football can represent best.”

He called for stricter laws to crack down on racism “that are applied in a very tough way”.

Eto’o – along with anti-discrimination body FARE Network – are the third recipients of the award from the European Council on Tolerance and Reconciliation, co-founded by European Jewish Congress chief Moshe Kantor.

He described Eto’o as an “icon” in the fight against racism and hailed his “courage and will to stand against the racists, building awareness and inspiring fellow footballers and millions of football fans”.

Recent footage showing Chelsea supporters refusing to allow a black man on to a train in Paris and West Ham supporters singing anti-Semitic songs as they travel through Stamford Hill showed racism was “still alive and well in football”, according to Kantor.

The philanthropist – who also highlighted the use of the quenelle and recent comments by Dave Whelan – added: “It is important at this worrying time to send a clear message that racism has no home in football.”

Also recognised was the FARE Network, an umbrella organisation that brings together 150 member individuals and organisations in 35 countries to combat inequality in football and use the sport as a tool to tackle societal discrimination. It works to combat many forms of discrimination including racism, sexism and homophobia.

Announcing the award, former speaker of the Bundestag Rita Sussmuth – one of the high-profile politicians and heads of state on the ECTR board – stressed the need to vigilant “from the very first signs of anti-Semitism” in society.

Howard Holmes, chair of the Network, spoke of the progress made in football in recent years. “Gone are the days of tiny fines that heap insult on injury,” he told the gathering, but warned the work is “not even close to being done”.