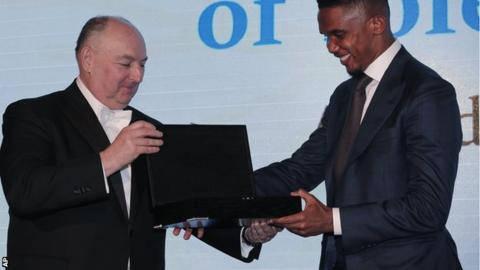 He was speaking at London’s Kensington Palace, where he was receiving an award for his anti-racism work.

Eto’o was presented with the European Medal of Tolerance by European Council on Tolerance and Reconciliation president Dr Moshe Kantor.

Chelsea have suspended five supporters following the incident in Paris but Eto’o, who spent the 2013-14 season at Stamford Bridge, said: “These five or 10 fans are not representative of all the other fans.”

The striker experienced racism in Spain in 2006 when he was a Barcelona player, threatening to walk off the pitch after Real Zaragoza supporters made monkey noises whenever he had the ball.

In Italy when Eto’o was playing for Inter Milan, the referee stopped the match when Cagliari fans made racist chants.

He played down concerns over racism tarnishing the 2018 World Cup in Russia, saying: “My experience in Russia was the most beautiful of my sporting career. I came away with a very good impression.”