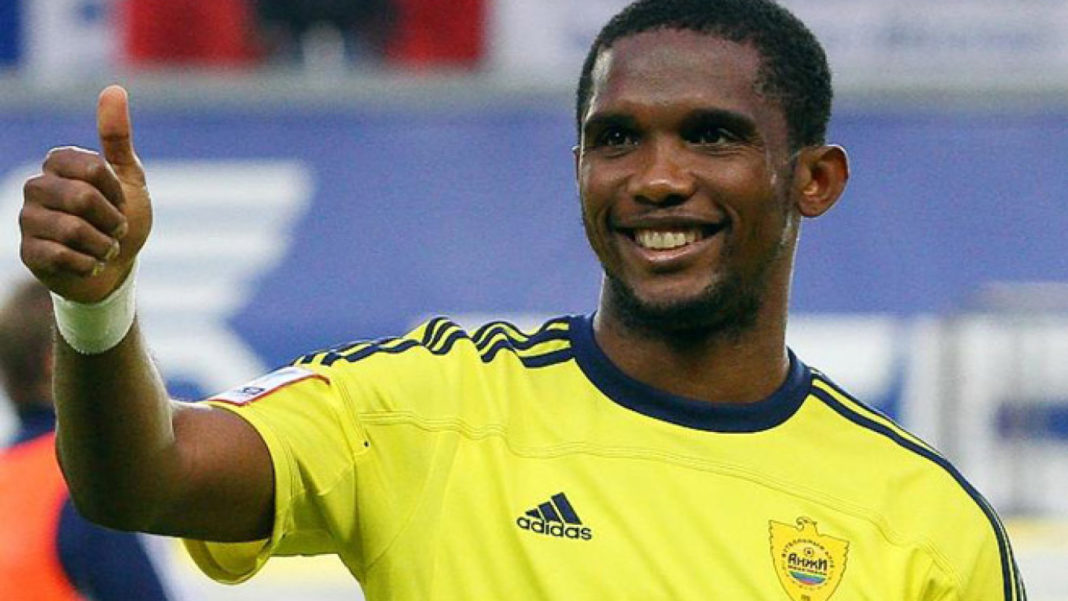 Collecting an award for his stance against racism Monday, former Anzhi Makhachkala striker Samuel Eto’o played down the risk of racism tarnishing the 2018 World Cup in Russia, despite recurring racist and xenophobic incidents in the Russian Premier League.

“My experience in Russia was the most beautiful of my sporting career,” Eto’o said in comments carried by Reuters. “I came away with a very good impression.”

A report published in February called for Russia’s implementation of a national action plan to thwart discrimination in football by tackling xenophobia and racism in society.

The report was compiled by the SOVA Center, a Moscow-based think tank focused on the issues of racism and nationalism, and the Fare Network, an international web of NGOs and advocacy groups dedicated to bringing an end to discrimination in football.

The study documented scores of racist and xenophobic incidents that were recorded in Russian football between May 2012 and May 2014, and noted that the list was “far from exhaustive.”

A string of foreign and domestic players have indeed faced racial abuse while playing in the Russian Premier League. Brazilian striker Hulk, who plays for Zenit St. Petersburg, alleged in December that he was racially abused by a referee during a match. In October, the Russian Football Union said Hulk had been targeted by racist fans of Spartak Moscow, barring the club’s supporters from attending the next away game in response to the incident.

In October, UEFA ordered that CSKA Moscow play three UEFA competition matches behind closed doors and banned its supporters from attending two of the club’s upcoming away games. The team was also ordered to pay 200,000 euros ($250,000) in fines for its fans’ racist behavior.

This was the third time CSKA Moscow was punished for its fans’ racist behavior in a year.

Eto’o called on Monday for stricter punishment for racial abuse and hatred on and off the pitch during his acceptance speech for the European Medal of Tolerance from the European Council on Tolerance and Reconciliation (ECTR), a nongovernmental organization.

ECTR President Moshe Kantor – also the president of the European Jewish Congress – said that the 34-year-old Cameroonian was receiving the award because of this “personal leadership and devotion” to fighting racism.

“Personally a victim of many racist incidents, he [Eto’o] has found the courage and will to stand against the racists, building awareness and inspiring fellow footballers and millions of football fans,” Kantor said, according to the website of the ECTR.

FARE was also honored at the ECTR’s ceremony, which was held at the Kensington Palace in London.

Eto’o took a stand in 2005 while playing for Barcelona, threatening to walk off the pitch after Real Zaragoza fans taunted him with monkey chants and threw peanuts when he got the ball. The following year, Eto’o was racially abused again at Zaragoza.

Eto’o played for Dagestan’s Anzhi Makhachkala from 2011 to 2013, scoring 25 goals in 53 appearances with the club. In 2011 he signed a three-year contract that made him the highest paid footballer in the world, earning 20 million euros after taxes per season, The Telegraph reported at the time.

The club’s billionaire owner, oil tycoon Suleiman Kerimov, decided to scale down the team’s budget and ambitions in 2013, leading to a mass exodus of its star players.

Eto’o, who currently plays for Sampdoria in Italy, has played for a series of top European clubs, including Inter Milan and Chelsea.

“I heard about the Chelsea fans in Paris and I was shocked about it,” said Eto’o, who spent the 2013-14 season at Chelsea. “You can’t condemn the club for just five or 10 people who have that attitude.”