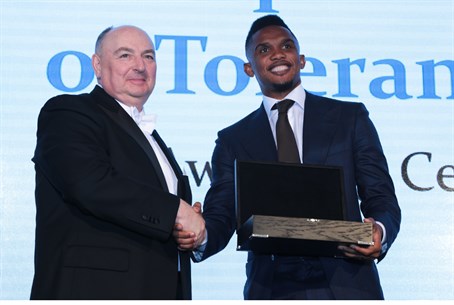 Football player awarded special award for his work against bigotry by leader of the European Jewish Congress (EJC).

On Monday night, at a gala event at Kensington Palace, three-time Champions League winner Samuel Eto’o and the FARE Network, an anti-discrimination and social inclusion network that counters inequality and exclusion in football, were awarded the Third European Medal of Tolerance by the European Council on Tolerance and Reconciliation (ECTR).

Arutz Sheva was also in attendance for the award ceremony.

I have decided that I will stand up and fight racism, whether inside the stadium or outside the stadium,” Eto’o stated in his acceptance speech. “This is very historic for me because in my family, we have many different colors [. . .] and this is something very important that we need to fight and we need to stand for.”

“I would just like you to remember these two important words: love and respect,” he added. “Because even when you love, you respect, and even when you don’t love, but have friendship, it’s all about respect.”

The ECTR is a non-governmental organization comprised of former world leaders and other senior public figures. Dr. Moshe Kantor, President of the ECTR, said that the award was to honor and reward the promotion of tolerance and reconciliation.

Dr. Kantor explained why an award for tolerance was being given to people from the world of football.

“Football symbolizes the cooperation of individuals towards one goal, with respect to the opponents, and with respect to the laws and rules of the game. Tolerance is based on competition but also cooperation, on trust, but also rules and regulations,” Dr. Kantor said during the presentation. “Samuel is a worthy recipient. Throughout his career he has taken a firm stance against racism bigotry, refusing to hide in the shadows, and as a consequence has raised awareness of racism in football and society.”

The award ceremony took place amid a time of rising racism, xenophobia and anti-Semitism, both in general and more acutely surrounding football. Recent footage showing Chelsea supporters proudly denying a black man the ability to get on a train in Paris and West Ham supporters singing anti-Semitic songs as they travel through Stamford Hill, an area known for a sizeable Jewish community, are just two recent examples of hate and intolerance by fans. Elsewhere, black players and players of color are regularly taunted in places like Italy, Holland and Spain, where last year a banana was thrown at Barcelona player Dani Alves who famously proceeded to eat it, and only last month when a match was suspended in Rotterdam after an inflatable banana was thrown at Roma’s Ivorian striker, Gervinho.

Additionally, on the field, former West Bromwich Albion player Nicolas Anelka made the ‘Quenelle’, a reverse Nazi salute made famous by Dieudonne, an anti-Semitic French comedian, and in the boardroom, where Wigan Athletic Chairman Dave Whelan was caught making anti-Semitic comments, demonstrate that racism and Antisemitism are not just found on the stands.

“The last year has been a particularly challenging one for football in terms of hate and racism,” Eto’o said. “As players, we need to take a moral stand because we are the people the spectators watch and we have to be a strong example of tolerance in a multi-racial society which I believe football can represent best.”

“Football has the ability to be a unifier rather than a divider and we should have a strong stand against hate, Antisemitism and racism as people involved in the world of football.” Kantor concluded.

The first recipient of the European Medal of Tolerance was His Majesty Juan Carlos I, the King of Spain and the second Medal was presented to the President of Croatia Ivo Josipović and the former President of Serbia Boris Tadić.