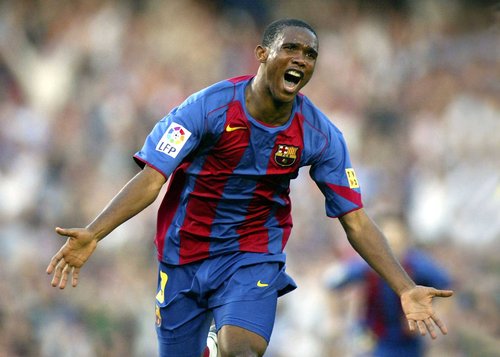 Former Chelsea striker Samuel Eto’o has called for racist football fans to be heavily punished as he returned to London on this wee to collect a reward for his stance against intolerance.

The former Barcelona striker, who has been a victim of racial abuse several times during his illustrious career, said he was shocked to see the
video footage last month of Chelsea fans pushing a black man off the metro train in Paris.

“I was shocked when I saw those images, but fortunately Chelsea has millions of fans worldwide,” African football’s most successful player said at the presentation at Kensington Palace in London.

“These five or 10 fans are not representative of all the other fans,’ added the four times African player of the year and twice African Nations Cup winner,” he added

Five men involved in the incident on the Paris Metro ahead of a Chelsea match have been served with summonses, police have said.

The men will appear at Waltham Forest Magistrates’ Court on March 25 ‘regarding a police application for football banning orders’, Scotland Yard said.

The Voice Newspaper was founded in 1982 by Jamaican-born accountant, Val McCalla, who was awarded a grant from the Greater London Council to fund his business venture.

The Voice newspaper campaigned for young Black Britons who faced discrimination at the hands of the law during the 1980s and in the wake of the notorious Brixton riots. It secured huge circulation figures from its sought after and unrivalled job recruitment section.

Over its near three decade reign as ‘Britain’s Best Black Newspaper’, The Voice has served the black community by giving them a voice where other mainstream newspapers have failed. It has over the years been a thorn in the side of the establishment, campaigning on numerous issues and championing the causes of black people nationwide. The Voice is a winning mixture of news, features, sports and celebrity interviews.