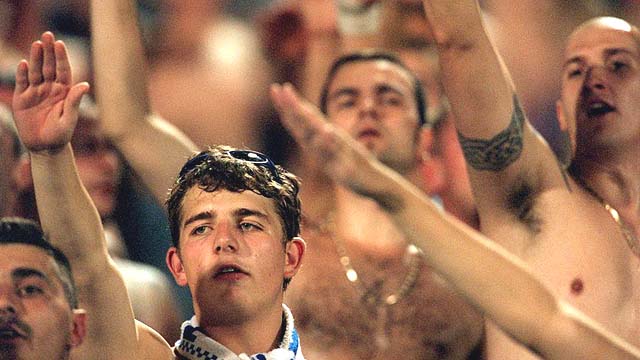 On Sunday, fans of FC Utrecht, a Dutch football club, chanted anti-Semitic slogans about the Holocaust

Following anti-Semitic chants by Dutch football fans on Sunday, calling for the gassing and burning of Jews, the European Jewish Congress (EJC) is calling on UEFA and European national football associations to enforce tough sanctions on offending clubs, including playing behind closed doors or docking points.

On Sunday, fans of FC Utrecht, a Dutch football club, chanted anti-Semitic slogans about the Holocaust and called for Jews to be gassed during a match against Ajax Amsterdam.

The EJC is aware of numerous such offenses in recent months across the continent, from our close monitoring of racist and anti-Semitic activity at European sporting events.

“It is time for UEFA and the KNVB, the Dutch football governing body, to implemented a ‘zero tolerance’ approach to anti-Semitism and racism in its stadiums.” Dr. Kantor, President of the EJC, said. “Football fans in the Netherlands and across Europe need to understand that if they involve themselves in racist and anti-Semitic behaviour, their clubs will suffer directly, by playing games behind closed doors or having points deducted.”

During Sunday’s match, dozens of Utrecht supporters chanted “My father was in the commandos, my mother was in the SS, together they burned Jews because Jews burn the best” and “Hamas, Hamas, Jews to the gas.” Apparently, police patrolling the game, allowed the chanting to continue for several minutes.

“There is a huge difference between meaningless football banter and violent incitement against Jews.” Kantor continued. “If this is unacceptable and criminal behaviour in any normative public environment, the same should be true for a mass public and often televised public spectacle such as a football match. The rule of law does not stop at the turnstiles.”