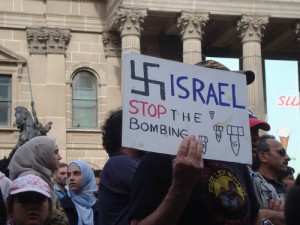 Israelis to observe two minutes of silence; report cites surge in anti-Semitism in 2014

There was an “explosion of hatred” against Jews through a dramatic rise in violent anti-Semitic incidents in Europe in 2014, according to a report released Wednesday by the Kantor Center for the Study of Contemporary European Jewry at Tel Aviv University.

The report shows a 38-percent rise in violent anti-Semitic attacks in 2014 on that continent, with a total of 766 incidents ranging from assaults with weapons to vandalism against Jewish property, compared to 554 such incidents in 2013.

The uptick in European anti-Semitism has been partly attributed to increased hostility to Israel as a result of last summer’s war with Hamas, as well as the “general climate of hatred and violence” instigated by the rise of the Islamic State terror group in the Middle East, the report’s researchers wrote. Last year was the worse year in terms of anti-Semitism in Europe since 2009, when there was also an Israeli military operation in Gaza.

Jews feel like “they are facing an explosion of hatred toward them as individuals, their communities, and Israel, as a Jewish state,” wrote the researchers, pointing to the often blurred line between anti-Zionism and anti-Semitism. Some of the protests that were held against Israel’s Operation Protective Edge ”deteriorated into violence while almost all of them included signs with hurtful slogans that included comparisons between Israel and the Nazis and the blaming of IDF soldiers for anything wrong under the sun,” they added.

“Synagogues were targeted, not Israeli embassies,” said Dina Porat, a historian who edited the report, according to Yedioth Ahronoth.

The report was released on the day that Israel marked Yom HaShohah, the Jewish state’s Holocaust Remembrance Day (which begins Wednesday night and lasts through Thursday). Around the world, there have been commemorations of the 70th anniversaries of the end of World War II and the liberation of the Bergen-Belsen concentration camp. Another poll conducted by the Forsa Institute, also released Wednesday, showed that about 42 percent of Germans no longer want to revisit their country’s Nazi past.

“There is a certain feeling that a lot is being shown about the past, about the horrors of it all, the liberation of Auschwitz and so on. It goes in the direction of people being swamped by it,” said Forsa Institute founder Manfred Guellner, according to Reuters.