European Rabbis To Meet Pope In The Vatican 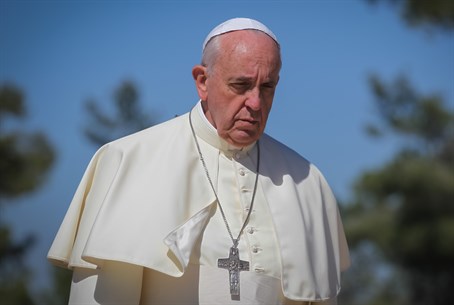 Leading European rabbis are set to meet with Pope Francis on Monday in the Vatican, where they will discuss the new anti-Semitism in Europe.

Leading European rabbis are set to meet with Pope Francis on Monday. The meeting will take place in the Vatican, the first time that a delegation of leading rabbis has ever met with the Pope there. The delegation will be led by Rabbi Pinchas Goldschmidt, President of the Conference of European Rabbis.

The rabbis and the Pope will discuss a number of issues, including the current climate for Jews in Europe. In recent months, there has been a marked increase in the number of attacks on Jews throughout Europe. A new report released just last week by the Kantor Center for the Study of Contemporary European Jewry at Tel Aviv University, together with the European Jewish Congress (EJC), showed that in 2014, 766 violent acts committed either with or without weapons and via arson, vandalism, or direct threats were directed against Jews or Jewish institutions such as synagogues, schools, community centers and others in Europe. The findings constitute a rapid increase of 38% when compared to the results of 2013, in which 554 violent anti-Semitic incidents were reported.

The report found attacks against Jews and their institutions made up a total of 68 reported cases, more than double the number in 2013. In addition there were 101 cases of direct violence without weapons. The number of Jews violently assaulted included over 306 people, a 66% rise in comparison to 2013. Arson cases more than tripled between 2013 and 2014, and there were a full 412 incidents of vandalism last year as well. There were 114 attacks on synagogues, marking a 70% increase, 57 attacks on community centers and schools, 118 on cemeteries and memorial sites, and 171 attacks against Jewish private properties.

Commenting on the upcoming meeting, the Interfax news service quoted Rabbi Goldschmidt as saying that “An era of constructive dialogue between the Vatican and Europe has arrived. We are allies today and we deeply respect Pope Francis as a person who has played an enormous role in promoting the development of inter-faith dialogue and in establishing peaceful relations between nations and religions. We hope that jointly we will ward off the danger of Islamic radicalism threatening Europe.

“We are also deeply concerned about the fate of European Jews, many of whom are leaving their homes under this threat,” Rabbi Goldschmidt added. According to EJC President Dr. Moshe Kantor, “many streets in our European cities have become hunting grounds for Jews, and some Jews are now forced to avoid community institutions and synagogues as a result. Some are choosing to leave the continent, many are afraid to walk the streets and even more are retreating behind high walls and barbed wire. This has become the new reality of Jewish life in Europe.”