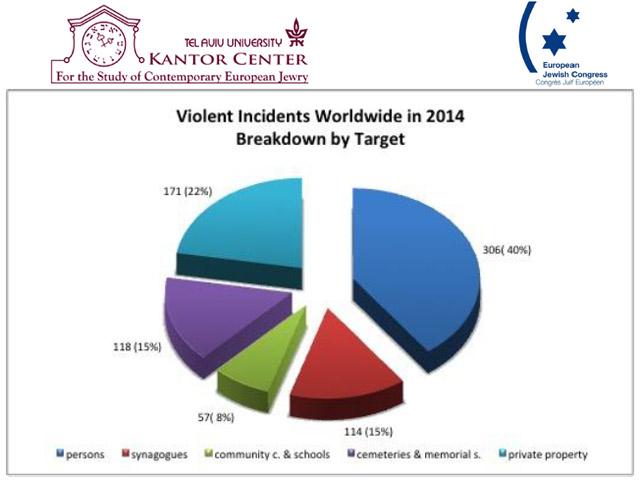 The year 2014 has been one of the worst years in the last decade, 2004-2014, in fact, it was the second worst year after 2009. Troubling and even alarming reports kept coming in from many countries, especially from Western Europe and North America, monitoring hundreds and sometimes over a thousand antisemitic manifestations and incidents of various types per country. The tendencies that characterized this difficult year, in which violent, verbal and visual expressions of antisemitism abounded, continued in the beginning of 2015, with increasing murderous and other attacks.

The overall feeling among many Jewish people is one of living in an intensifying anti-Jewish environment that has become not only insulting and threatening on a daily basis, but outright dangerous. Jews realized, especially in Europe that there are no more taboos and restrictions when it comes to antisemitic manifestations. The question is what future is there for communities and individuals. The issue is not only a matter of having more security means provided by the respective states, but rather of the ability to lead full Jewish life in Europe, under heavy police and even army protection, and the necessity to add self-defense to the communities’ agenda.

Numbers of Antisemitic Incidents. During 2014 the Kantor Center registered 766 violent antisemitic acts perpetrated with or without weapons and by arson, vandalism or direct threats against Jewish persons or institutions such as synagogues, community centers, schools, cemeteries and monuments as well as private property. These 766 cases mark a sharp increase of 38% compared to 2013, in which 554 violent incidents were registered. In this regard 2014 has been the second worst year of the decade, coming next after 2009

The categorization of violent activities reflects a most troubling situation: The number of attacks on Jews and their property and institutions with weapons, that amounted to 68 cases, has more than doubled in comparison to 2013, in addition to 101 cases of weaponless violence. The number of arson cases has more than tripled in comparison to the previous year, and there were 412 incidents of vandalism. More than 306 people were targets of attacks, an increase of no less than 66% in comparison to 2013; the 114 attacks of synagogues marked an increase of 70%; and as many as 57 community centers and schools, 118 cemeteries and memorial sites as well as 171 private properties were targeted.

The situation in Eastern Europe is different: In the Ukraine (28 compared to 23), Hungary (15 compared to 14), and in Russia and Romania numbers even slightly decreased. Most communities, experts and agencies, try to monitor not only the violent cases (as the Kantor Center does), but rather all manifestations of antisemitism in their various forms, including the verbal and the visual, and the results are no less troubling: overall cases in France rose from 423 to 851 (threats for instance, were doubled, 610 compared to 318); in Australia 312 compared to 231; in Germany 1076 compared to 788; in Belgium there was a rise of 60%; in Austria the numbers doubled, from 137 to 255. In the UK 1168 incidents – the highest annual total number ever- were registered across the country, more than twice the number of 535 incidents in 2013, and this is just a list of major cases.

Operation Protective Edge in Gaza, in July and August 2014 brought about a wave of anti-Semitic activity, but still, the first half of 2014 had already proved to be a very difficult period for Jews as individuals and as members of communities. One more reason is the way Demonstrations were organized during the operation: Hundreds of demonstrations, organized primarily by extreme leftists and anti-Israeli radical Muslims, took place mainly in Western and central Europe. Some of them turned violent; in most of them banners and posters carried abusive slogans, comparing Israel and its Jewish supporters to Nazis and blaming them and Israeli soldiers for every evil on earth. It is the present crisis of values, that characterizes contemporary western societies, coupled with profound ignorance that drives confused youngsters to look for easy to catch black and white symbols. It is questionable whether many of those who joined the anti-Israeli rallies actually know much about the Middle East or the Nazi era and the Holocaust.

The Return of Classic Antisemitism. A host of ugly caricatures, served as a vehicle for visualizing the symbols of good and evil, culprits and victims, often showing Jews and Israelis in the same known Der Stürmer fashion: cruel, blood thirsty, killing children with a sneering smile under a crooked nose. The caricatures reflect the return of classic antisemitism, that has not been noticed for years, and now gains increasing ground, if not instead of anti-Zionism and anti-Israelism then at least alongside them. Biased western and Muslim media enhanced stereotypes of classic old antisemitism, when it transmitted a certain Jewish-Israeli image.

Cruelty on the Rise. The ISIS (the Islamic State of Iraq and Syria) phenomenon, and the bloody character of events unfolding in the Middle East and North Africa since the so-called “Arab Spring”, have raised the level of cruelty to hitherto unknown new heights. Having their dark charm, cruelty and violence attract, especially the younger audiences, and are being constantly instilled into western culture.

The Gap Between Responses of European Leaders and Officials, and the Public at Large. European leaders and heads of states made ardent promises for more security and expressed solidarity, describing the Jewish communities as part and parcel of Europe. There are more efforts than in previous years, of organizations and governmental agencies, to legislate against antisemitism and Holocaust Denial, and at least to implement existing laws, to discuss definitions of antisemitism and racism, to commemorate the Holocaust and to offer recommendations to the administrations .The problem we would like to pin point is that these efforts, as genuine as they may be, and financed by governmental budgets in most western countries, have no meeting point with the street, or rather with the forces working against them: the far right, the extreme left, radical Islamists and politically non-identified publics.