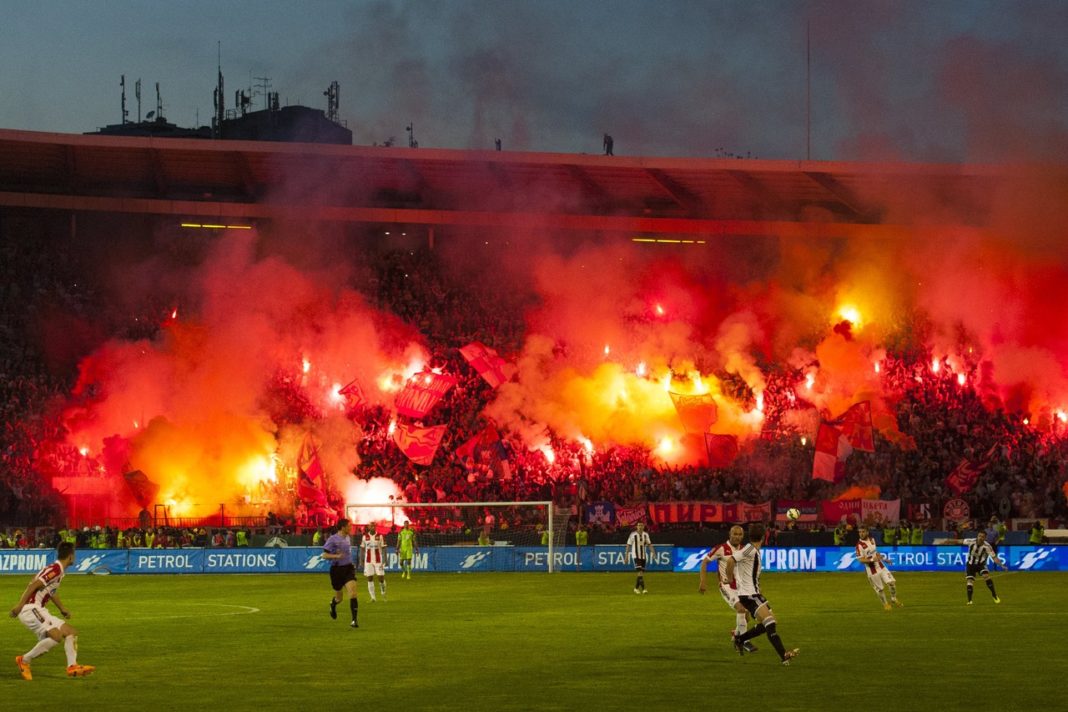 Fans of the soccer team Red Star, furious at being penned in at the stadium before a match against rival Partizan, began ripping out the hard plastic seats and hurling them by the dozens at the police.

For 45 minutes it went on, fans throwing lighted flares and metal objects while police fought back with military-style maneuvers, surging toward the fans and clearing out sections of the stadium. Some fans were bloodied and 41 arrested.

When order was restored and the game finally started, Partizan fans rained dozens of flares on the police, spewing smoke that covered the field and blinded the players. Play was suspended.

Scenes like these, witnessed at a game on Saturday between Belgrade’s bitter crosstown rivals, underscore the growing fear of a surge in soccer-related violence in Europe.

Violence has long surrounded European soccer, but recent figures-and some extreme, headline-grabbing examples-suggest it may be getting worse, driven by Europe’s economic struggles and what’s seen as an accompanying rise in nationalism and racism.

“In recent months we have all been struck by certain images that I thought were things of the past,” said Michel Platini, Europe’s top soccer official. He warned against reviving “a past where hooligans and all manner of fanatics called the shots in certain European stadiums.”

Eruptions have become too frequent to list. In Spain, a 43-year-old fan died in a bloody 200-person brawl in November outside a Madrid stadium. Dutch fans in February rampaged through Rome, damaging a priceless 400-year-old fountain. Greece briefly suspended its soccer leagues this year after a series of violent outbreaks.

Racist incidents, from throwing bananas at black players to anti-Semitic or antigay chanting, also appear to be rising; the U.K.-based group Kick It Out counted 71 discriminatory incidents in Britain this season compared with 43 at this point last year.

‘Casualties are not rare’, – Aleksandar Pavlovic at Union-Nikola Tesla University in Belgrade

Experts say statistics on soccer-related violence should be treated with caution, but some, at least, are troubling. In Germany, officials reported 7,863 soccer-related offenses last season, up from 4,576 in 2005-06. Italy saw 1,515 last year, up from 1,161.

In Spain, penalties for sports-related offenses jumped by 22% last season from the previous year. Elsewhere figures suggest a halting improvement; Britain and Romania reported drops in many categories.

But the sense among some enthusiasts is one of menace. “The possibility of violence is always present,” said Aleksandar Pavlovic, a member of the sports faculty at Belgrade’s Union-Nikola Tesla University. “Casualties are not rare.”

As rabid as American fans can be, Europeans marvel at the relative lack of violence in U.S. stands. Even the fiercest rivalries are essentially entertainment in America, while soccer in Europe can be a form of social confrontation.

This is in many ways a new twist on an old problem. English soccer hooligans became notorious in the 1980s, culminating in two major tragedies. In 1985, a melee collapsed a wall at Belgium’s Heysel stadium, killing 39 people, and a 1989 disaster at Britain’s Hillsborough Stadium crushed 96 fans.

Many Western European countries reacted by reducing the police presence at soccer games, emphasizing instead measures like ongoing contact with fan groups, bans on the worst hooligans and the use of “stewards” to resolve smaller conflicts during games.

The story is different in Eastern Europe, where communism’s fall unleashed nationalist and ethnic passions that are still flaring, and countries like Poland and Romania now have some of the fiercest “ultra” clubs, a general term for the most extreme.

Europeans note that they are not alone; a football riot in Egypt killed 74 people in 2012. And many fans say the violence, perpetrated by a small number, is often sensationalized.

But few deny a problem exists. That is certainly true in the Balkans.

A 1990 game between Red Star and a Croatian team, Dinamo Zagreb, sparked a riot that ended the game after 10 minutes and is still considered a key event in Yugoslavia’s breakup.

In the following years, Serbian paramilitaries recruited from fan groups for the Balkan wars, as soccer hooligans became warriors and vice versa.

During an Oct. 14 match with Albania in Belgrade, someone flew a drone over the field with a provocative banner reading “Greater Albania.” A Serbian player grabbed the banner as the drone buzzed overhead, sparking a melee that engulfed players and fans.

‘It’s the kind of love one feels for a country or a woman or a child’, – A tattooed Red Star fan

And it is easy to find. In 2011, a dozen Serbians were convicted of killing a French fan with iron bars and baseball bats. That same year, a Partizan fan was killed in a battle between two of the team’s rival fan groups.

One Red Star fan, whose muscled arms bear tattoos of a medieval Serbian knight and a map of “Greater Serbia,” described his passion for his team as almost sensual. “It’s the kind of love one feels for a country or a woman or a child,” he said.

In Serbia, the teams are publicly owned, and authorities are now struggling to control the problem as they seek to move closer to the European Union. The government in 2013 adopted a strategy on sports violence, including such measures as stronger bans on violent fans.

But experts say the clubs are entwined with crime and politics and cannot be reformed through better policing. “There is no evidence that the [Serbian] authorities are getting a grip on the situation,” said Geoff Pearson, a law professor at the University of Manchester in the U.K.

Mr. Pearson, an expert in soccer-related violence, spoke to officials on the subject last weekend in Belgrade.

Red Star and Partizan, Serbia’s most storied teams, each have a main fan clubs: the Grobari, or gravediggers, of Partizan, and the Delije, or heroes, of Red Star.

“It’s a daily rivalry. It’s 365 days a year,” said Dusan Mihajilovic, 35, a lifelong Partizan fan. Mr. Mihajilovic said he married a Red Star fan only on condition that they raise their children pro-Partizan.

“It was one of the things I insisted on when we got married,” he said. “I said I could cope with anything except them being Red Star fans.”

Such sentiments help explain the tension before Saturday’s game. As the fiercest Red Star fans took up their accustomed position at the stadium’s north end, they and Partizan supporters began screaming at each other.

Police attempted to keep the fans confined, but they became increasingly agitated and violent. After dozens of injuries on both sides, the police managed to clear a section of the stands and impose an uneasy order, which was periodically broken during the game.

Serbian Prime Minister Aleksandar Vucic later condemned the violence as terrible and said the country’s sports teams would be privatized.

Lost in the chaos was the game itself. The final score: 0-0.