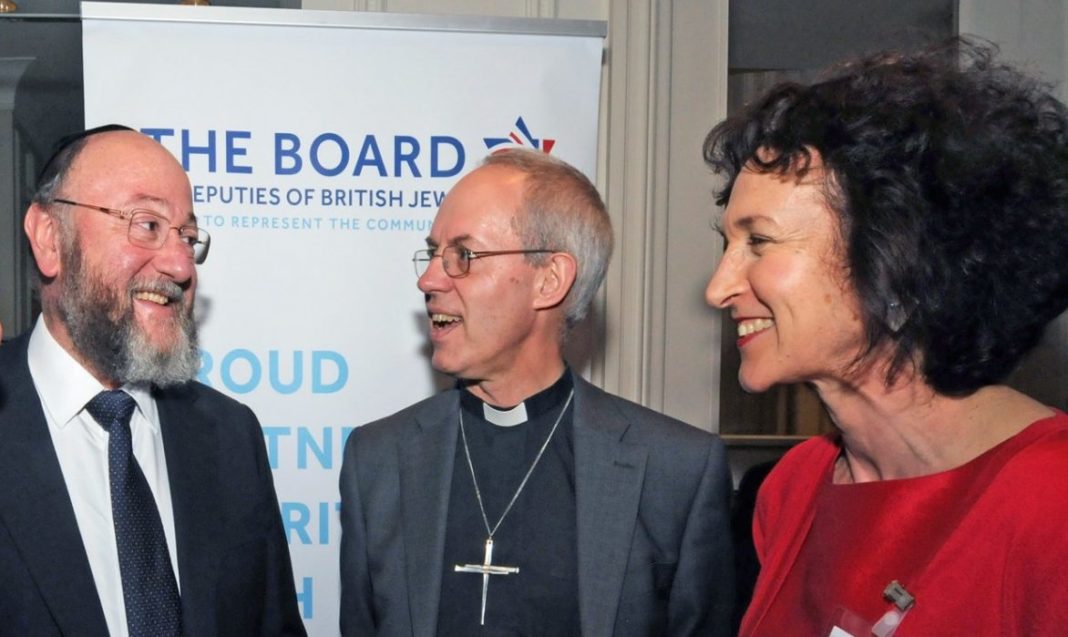 The Archbishop of Canterbury, the Rt Hon Justin Welby has told the Board’s 2015 dinner that all faiths need to come together to combat religious violence.

The Archbishop, speaking in front of 350 guests at the event held in central London, said that Christians, Jews and others need to find an ideology “that undermines, that subverts, the arguments of the radicals, that models an alternative that is about human flourishing and about the flourishing of human societies”.

He also took the opportunity to promise to “take antisemitism seriously within the church” and implicitly apologised for the statements of the Rev Stephen Sizer, who suggested there may have been Israeli involvement in the 9/11 attacks. Archbishop Welby said: “We had the atrocious use of language in a tweet from an ordained member of the Church of England. And that’s why I want to say, in this speech, how sorry I am that that happened, to apologise for that. We did seek to deal with it quickly and effectively, and I hope and pray that we have done so.”

He also praised the Board’s work. “This is an extraordinary body, whose existence over such a long period speaks volumes of the place of the Jewish community in the United Kingdom – and has earned that place by hard work and persistence.”

Board president Vivian Wineman, who stands down later this month after six years, told guests: “It has been a great privilege as well as a pleasure to represent this community with its vitality richness and diversity. It is a model to communities abroad and an example to other faith communities in this country.”

Mr Wineman added: “There have been huge changes since I started in office particularly in social media. There is no reason to think that the next six will not be equally full of change. We have to be nimble to survive.”

Dr Moshe Kantor, President European Jewish Congress, told the dinner: “We need to rely on a strong and long-term Christian-Jewish collaboration and unite our forces against our common enemy, which is religious radicalism.”

At the dinner, chaired by Sheila Gewolb, a film highlighting the Board’s work was shown to guests as were video responses to the Board’s Jewish Manifesto by the Prime Minister, Deputy Minister and Leader of the Opposition..

Source: The Board of Deputies of British Jews