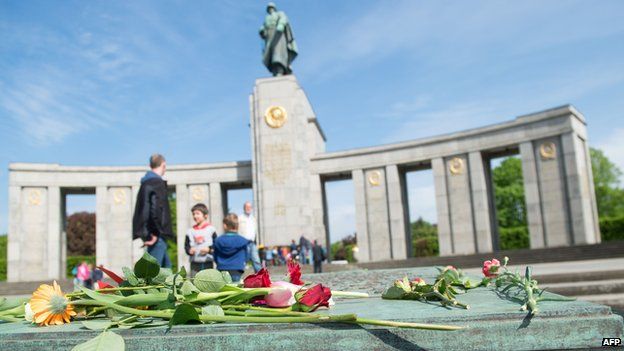 Events have been held across Europe to mark the 70th anniversary of the end of World War Two on the continent.

Ceremonies were held in Paris, London and Berlin. Moscow will hold its event on Saturday.

US Secretary of State John Kerry joined the commemoration in Paris, laying a wreath at the Arc de Triomphe.

One of the first events was held in the Polish port of Gdansk, at the site where the first shots of the war were fired.

Attended by UN Secretary General Ban Ki-moon and a number of leaders from eastern European countries, the commemoration began with a 21-gun salute in the city’s Westerplatte on the stroke of midnight.

Poland had organised the event as an alternative for those leaders who are boycotting Moscow’s Victory Parade because of ongoing tensions over Russia’s role in Ukraine’s conflict.

But most European leaders attended events in their own country.

French President Francois Hollande was joined by US Secretary of State John Kerry for the commemoration at the Arc de Triomphe in Paris, site of the Tomb of the Unknown Soldier.

President Hollande called VE Day a “victory of an ideal over a totalitarian ideology”.

In Germany, parliament held a special session in which speakers paid tribute to both Western Allied forces and the Soviet Army who brought the war to an end.

Parliamentary Speaker Norbert Lammert called 8 May 1945 “a day of liberation” for Germans.

Dr Moshe Kantor, President of the European Jewish Congress, said: “We need to learn the tragic lessons from the past to ensure that history does not repeat itself. We need to fight against prejudice, hatred and intolerance.”

In London – on a day when the UK welcomed in a new government – a remembrance service was held at the Cenotaph and 200 beacons were lit across the country.

US President Barack Obama gave a radio address, praising a “generation that literally saved the world”.

Later a ceremony was held at the national World War Two memorial in Washington, followed by a flypast of vintage fighter planes.

Russia is planning to showcase its military might at its Victory Parade on Saturday.

It was on 8 May 1945 that Allied forces accepted the unconditional surrender of Nazi Germany, marking the end of the war in Europe. But it was not the end of WW2. It would take another three months before Japan surrendered.