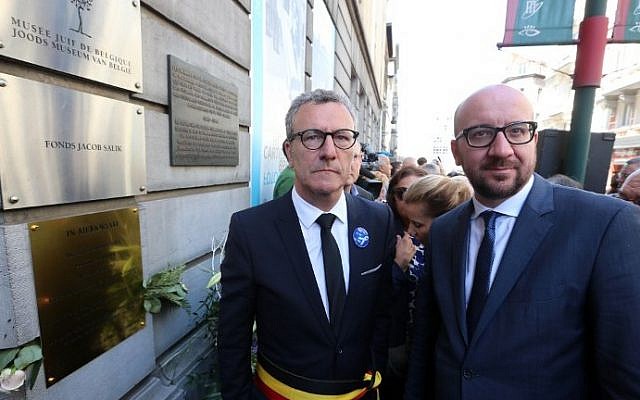 Says Mayor: ‘All Jews have their place in Brussels… A year later we are still angry over this violent act’

The mayor of Brussels led tributes Sunday to the four people murdered at the Jewish Museum a year ago as he sought to reassure Jews about their future in the Belgian capital.

Mayor Yvan Mayeur also renewed his condemnation of the attack allegedly carried out by an Islamist extremist, as he spoke outside the museum to a crowd of several hundred people, including Belgian Prime Minister Charles Michel.

“Brussels is Jewish because all Jews have their place in Brussels,” Mayeur said from a makeshift podium in the closed-off street guarded by four Belgian soldiers and at least a dozen police officers.

Mayeur was seeking to reassure Belgian Jews who are increasingly worried about their safety and considering leaving the country following not just the attack but what they say is an increase in anti-Semitic acts in the last 15 years.

“A year later we must maintain a sense of indignation and anger against this violent act,” Mayeur added outside the museum which was closed exceptionally Sunday to allow staff to privately commemorate the event.

“It’s a terrorist and anti-Semitic act which is unacceptable for us, especially in a city like Brussels which is an open and cosmopolitan city where 160 nationalities live together,” the mayor said.

Six days after the Brussels attack, police in the southern French port city of Marseille arrested 29-year-old Frenchman Mehdi Nemmouche, who had gone to fight with jihadists in Syria.

Found with weapons similar to those seen on museum security cameras, Nemmouche was extradited to Belgium at the end of July.

While waiting for his trial, for which no date has been set, he has denied having carried out the attack.

“What happened here was a real shock to the Jewish community,” said Serge Rozen, who organised the tribute as head of the Coordination Committee of Belgian Jewish Organisations.

“I think probably for the first time they realized that even with security measures already in place for a long time in Belgium, you could be killed here in Brussels or Belgium because you are a Jew or presumed Jew,” Rozen told AFP before giving a brief speech.

He said many in Belgium’s estimated 40,000-strong Jewish community were starting to wonder whether they had a future in the country.

European Jewish Congress chief Moshe Kantor told AFP recently that Jews were on the frontline of an Islamist militant war against democracy itself, adding “the situation for the Jews of Europe hasn’t been as bad since the end of the Holocaust.”

Michel, the Belgian premier, told AFP that his government would over the next months and years continue to reinforce security for Jews and other Belgians threatened by terrorism.

“To be here is also a determination to act against anti-Semitism, act against radicalism, against terrorism,” said the leader who kept a low profile by not giving a speech.

“What unites us here is the fact that we are citizens of the world. If we defend this universal idea, we will be able tomorrow to live a little bit more together… and perhaps (eventually) start to love each other,” he said.