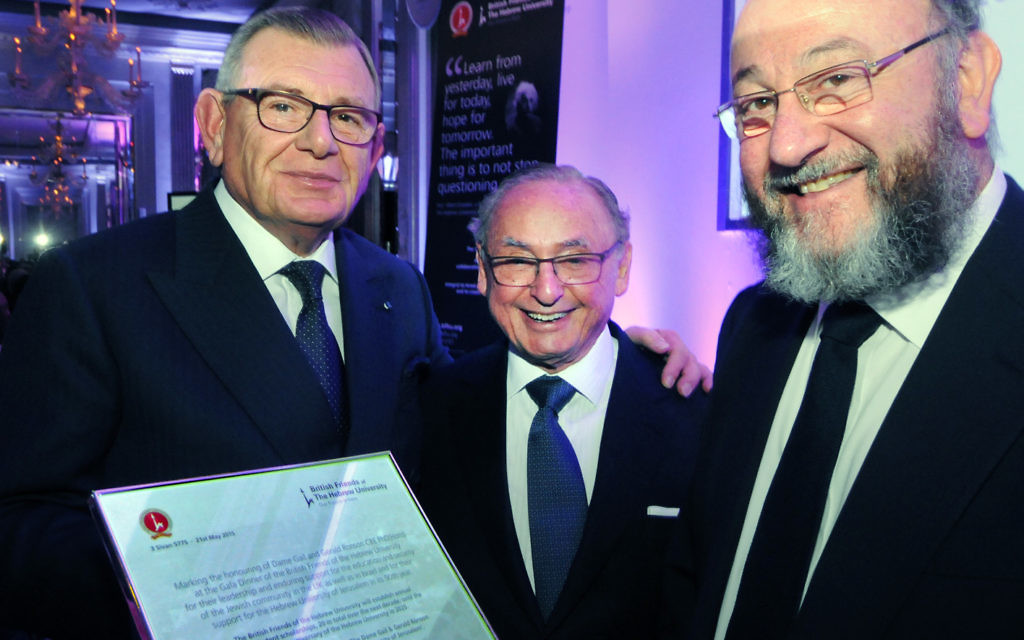 The superlatives came thick and fast last week during a central London dinner honouring “visionaries” Dame Gail and Gerald Ronson’s contribution to the security and education of Anglo-Jewry.

The Chief Rabbi, European Jewish Congress head Moshe Kantor and Sir Trevor Chinn were among those paying tribute to the couple at a British Friends of Hebrew University event, which also marked 90th anniversary of the Jerusalem institution.

Mr Ronson chairs the Community Security Trust and was a driving force behind the building of JCoSS and other schools in the UK and Israel, while his wife has played a leading role in Jewish Care and was made a dame for charitable endeavours inside and outside the community.

Chief Rabbi Ephraim Mirvis described the Ronsons as an “incredible couple always leading from the front. We love you”, while Kantor said they were “a winning team, role models for this community and European Jewry”. He added: “My aim is to have a CST in every community in Europe. To achieve this we need to find a Gerald in every community. Not an easy task, maybe even impossible.”

BFHU chair Isaac Kaye said their contribution “particularly in security and education is without parallel”.

A series of medical scholarships bearing the Ronsons name was announced.

The businessman, who last year received an honorary doctorate from the university, said there “is no better organisation than one that helps people fulfil their potential and that’s typified by Hebrew University”.