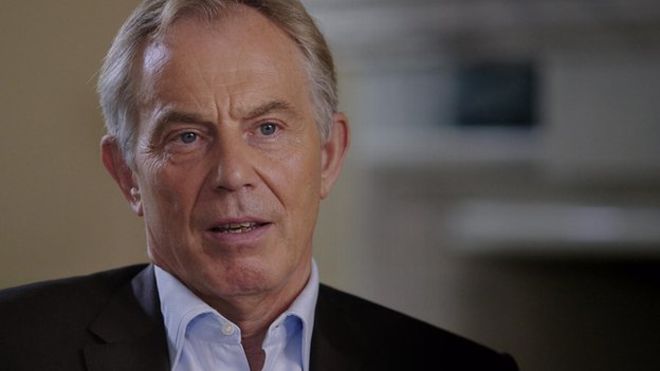 Tony Blair is to be become the chairman of an organisation that combats anti-Semitism and racism in Europe.

The former UK prime minister will join the European Council on Tolerance and Reconciliation, which has campaigned for tougher laws on extremism.

Mr Blair is standing down this month as the Middle East envoy representing the US, Russia, the UN and the EU.

He will not be paid in his new role, but his faith foundation will reportedly receive an annual donation.

The ECTR describes itself as an “opinion-making and advisory body”.

It has called on European countries to bring in legislation creating clearer definitions of racism and anti-Semitism, boost educational programmes and make Holocaust denial a criminal offence. The organisation also wants governments to provide security at synagogues and Jewish schools.

Writing in the Times, Mr Blair and Moshe Kantor, a Russian-born businessman who co-founded the ECTR in 2008, said Europe was facing “dangerous times”.

They said “economic decline fuels instability”, noting that the only three times in the past 100 years when the annual GDP growth in Europe went below 1% was just before World War One and World War Two and last year.

Mr Blair and Mr Kantor, who is also President of the European Jewish Congress, highlighted a report on global anti-Semitic incidents by the Kantor Centre at Tel Aviv University which found last year was one of the worst years in the past decade.

“It is our firm belief that it is not religion or faith per se that causes or foments conflict,” they added. “It is the abuse of religion which then becomes a mask behind which those bent on death and destruction all too often hide.”

They cited the Northern Ireland peace process, which Mr Blair was involved in, as a “prime example” of a situation from where lessons can be learnt.

“Globalisation is pushing us closer together so the effects of racism and discrimination increasingly undermine the fabric of society… states, international organisations and other actors must join together to tackle hate and intolerance.”

Mr Blair is taking over from former Polish president Aleksander Kwasniewski as chairman of the ECTR. He will head a board that includes former Spanish Prime Minister Jose Maria Aznar and ex-Swedish PM Goran Persson.

His decision to quit as Middle East peace envoy post was announced in May. Sources said, however, that Mr Blair would “remain active” in the region in an informal role and was fully committed to assisting the international community in its work with Israel and the Palestinians to bring about progress on the two-state solution”.