Blair Gets A New Job 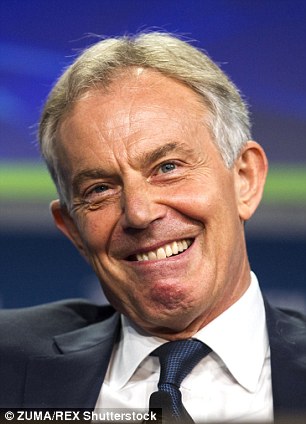 Tony Blair will today announce he is taking up a new role heading an organisation dedicated to fighting racism and anti-Semitism in Europe.

The former prime minister stood down from his position as Middle East envoy for the Quartet – the United Nations, the US, the EU and Russia – just a week ago after criticism of his record and global business interests.

But last night it emerged that he is to become chairman of the European Council on Tolerance and Reconciliation, which encourages countries to ‘fight such evils as racism, anti-Semitism and xenophobia’.

It campaigns for European nations to pass laws to criminalise hate speech and Holocaust denial, provide funding for security at places such as synagogues and religious schools, and examine the causes of extremism.

Set up by former Polish president Aleksander Kwasniewski and Moshe Kantor, President of the European Jewish Congress, the group aims to carry out seminars for thousands of school and university students across Europe in the next two years – about tolerance and the role of religion in society.

In a joint article announcing his new post, Mr Blair and Mr Kantor – a businessman and philanthropist, write: ‘Racism and discrimination in the name of religion must be tackled with tough new laws’.

They add: ‘We live in dangerous times. There have been three periods in the past hundred years when the annual GDP growth in Europe went below 1pc : first in 1913 just before the First World War, second in 1938 just before the Second World War and third in 2014. Economic decline fuels instability and we know these concerns are being felt across the world.’

One of the areas the Brussels-based Council claims to focus on is reconciliation ‘post-conflict’ which is likely to trigger criticism of Mr Blair’s decision to invade Iraq in 2003 and the disastrous consequences of it.

In the article in The Times, the former Labour leader urges governments and other organisations to act to tackle hate and intolerance because, he and Mr Kantor say: ‘If we wait for our armies, to act, it will be too late.’

They point to studies showing that anti-Semitic incidents reached their highest levels for a decade last year. They say: ‘Anti-Semitism is not a Jewish problem but one infecting the whole of society’.

Mr Blair stood down from his Middle East role after eight years of controversy in the role he was handed in 2007.

The appointment raised eyebrows around the Middle East because of his role as an architect of the 2003 Iraq invasion and the fact he continued to defend it and offer advice on stabilising the region which is in unprecedented turmoil.

His resignation followed criticism about potential conflicts of interest between Mr Blair’s role in trying to further peace in the troubled region, and his business activities which have earned him tens of millions.

His clients include PetroSaudi, an oil firm with links to the ruling Saudi royal family, the bank JP Morgan, and Mubadala, an Abu Dhabi wealth fund.

Critics pointed out that peace between Israel and the Palestinians is as far away as ever, there is civil war in Syria and the continued incursion of Islamic State into Iraq.