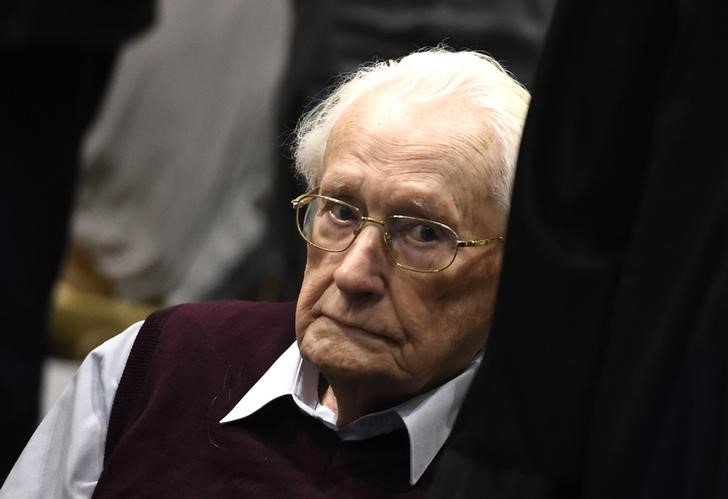 A former concentration camp guard nicknamed the “Bookkeeper of Auschwitz” has been sentenced to four years in prison, in what is likely to be one of the last trials in Germany relating to Nazi-era crimes.

Oskar Gröning, 94, who spent two years at Auschwitz after volunteering to join the SS, was found guilty at a court in Lüneburg, in northern Germany, of being an accessory to the murder of 300,000 people.

Although 1.1m people were murdered at Auschwitz, prosecutors concentrated for legal reasons on one operation – the round-up of Hungarian Jews in 1944, of whom 425,000 were then sent the Nazi death camp in occupied Poland.

Mr Gröning was responsible for collecting money that was found in prisoners’ clothing and luggage when they arrived at the camp, and sending the banknotes on to Berlin.

Prosecutors say Mr Gröning, who was a bank clerk before joining the SS, admitted knowing from the beginning that Auschwitz was an extermination camp.

Detainees at Auschwitz were sorted between those who were fit for work and those sent to their immediate deaths. Mr Gröning has spoken openly about his role in the past and described himself as a “small cog in the machine”.

In 1958, prosecutors decided not to pursue a case against Mr Gröning on the grounds that there was no link between his activities and the killings at the camp.

However, the case of John Demjanjuk, convicted in 2011 by a German court for war crimes committed at the Sobibór extermination camp, established a precedent that lower-level camp functionaries could be tried as accessories to mass murder.

During his trial, Mr Gröning admitted witnessing murders including watching an SS colleague smash a baby’s head against a lorry.

Moshe Kantor, president of the European Jewish Congress, said: “Although more than 70 years have passed since the liberation of the Nazi death camps, this trial reminds us that there is no statute of limitations for those responsible for Nazi horrors.”

The verdict comes at a time when Germany is once again confronting its Nazi legacy, following the 70th anniversary of the liberation of Auschwitz by Soviet troops in January 1945.

While the German government used the occasion to insist that remembrance of the Holocaust was a central part of German identity, there is resistance to this view. A poll published by Stern magazine in April showed 42 per cent of Germans favoured drawing a line under the country’s Nazi past.

In recent decades, there has also been an increased emphasis on how Germans suffered during the war, notably with the publication of historian Jörg Friedrich’s book Der Brand, which portrayed the Allied bombardment of German cities as a needlessly brutal assault on civilians.