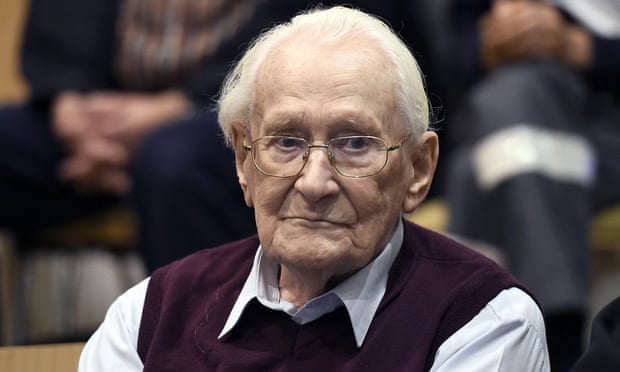 Oskar Gröning’s conviction for being an accessory to the murder of 300,000 Jews in Auschwitz-Birkenau between May and July 1944 is being hailed as a triumph for justice and a vindication of the new, proactive approach of the German judiciary with respect to Nazi-era crimes. Moshe Kantor, head of the European Jewish Congress, declared that they welcomed today’s verdict “and the historic significance of the trial”.

The verdict of the German district court at Lüneberg is also seen as drawing a line under the past, the final reckoning with Auschwitz. Actually, it is none of these things, and the case raises more questions than it answers. It may have decided the guilt of one SS man who served at Auschwitz, but it does nothing to explain why for decades prosecutors, judges and civil servants in West Germany allowed men like him to live untroubled by the fear of retribution.

The outcome of the Gröning case leaves a sour taste. Of course, the trial was necessary – the lapse of time did not erase the offence. But criminal law exists to protect society from offenders, to act as a deterrent, and to show our abhorrence for certain deeds. There was little chance that Gröning was going to harm anyone, or that Auschwitz would rise anew in Germany. Nor have successive war crimes trials deterred the commission of mass atrocities since 1945. The fact that it took decades to bring him to court sends a very mixed message to contemporary genocidaires. Yes, justice is relentless, but it can take a very long time to catch up with you.

The trial was valuable for teaching a new generation about Nazi crimes, but Germany has a profusion of memorial sites, commemoration days and superb educational programmes. We will long remember the survivors testifying: elderly men and women who dreamed of one day seeing an SS guard in the dock.

However, none of them could directly address Gröning’s activities, and there was something of a show trial about their declamations. Certain legal theorists like Mark Osiel argue that the courtroom should be used for educating society, but there is a danger that using the law to teach a lesson about history brings the judicial process into disrepute.

Finally, the sentence could never match the scale of the crimes. Even though the judges erred on the side of harshness, a penal sentence of four years amounts to one year for every 75,000 lives taken while Gröning was in Auschwitz. But a life sentence on a man aged 94 looks cruel if not unreasonable and, anyway, by the law of nature could not amount to much more custodial time that he has received.

Due to the passage of time this trial was always going to end in ambiguity. The real question is: why did it take so long to bring him to justice? We know that throughout the 1950s the West German judiciary and civil service was packed with men who served under Hitler. They shielded perpetrators and, if they were tried, ensured they got off lightly. The creation of the Federal Office for the Prosecution of Nazi Crimes in 1958 marked a breakthrough, resulting in a string of important prosecutions and trials. One of these was the trial in Frankfurt in 1963-64 of officers and guards who had served in Auschwitz. Gröning was questioned in connection with the investigation, but he was not amongst the defendants.

Due to the statute of limitations in West Germany, no one could be prosecuted for being an accomplice to murder after 15 years had elapsed since the alleged offence. Hence the men on trial at Frankfurt were accused of murder, torture and sadism.

Someone with a role like Gröning’s did not come into the frame. It was not until 2011 and the trial of John Demjanjuk in Munich, that proactive German prosecutors constructed the law to enable men to be charged just by virtue of having served at a death camp. By this time, Gröning had even gone on TV to talk about his role in Auschwitz. Not only did it become possible to try him, but by virtue of his statements the verdict was a foregone conclusion. Yet justice so delayed amounts virtually to a denial of justice.

This outcome casts a sickly light over the West German legal system – there is still unfinished business here. The German government should establish a historical commission, like the one that investigated the conduct of the foreign office under National Socialism, to determine why jurists interpreted the law so narrowly that thousands of Grönings escaped any form of retribution, however belated and inadequate.