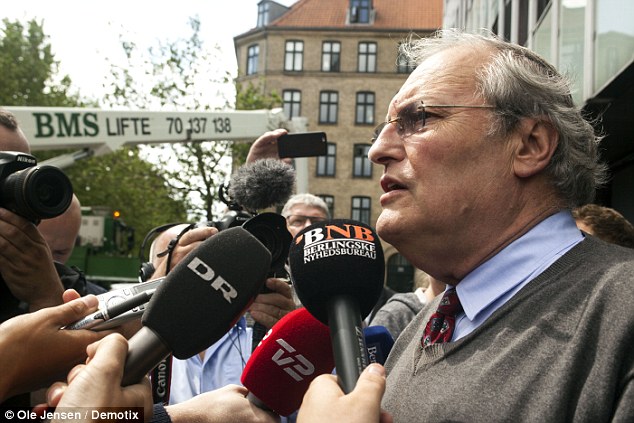 A top Nazi hunter has today filed a police complaint against a Danish man for allegedly working as a guard in a Belarus concentration camp during the Second World War.

A Danish book released last year claimed Helmuth Leif Rasmussen, 90, worked as a guard in the Bobruisk camp in Nazi-occupied Belarus, citing a police report from 1945.

Rasmussen, who has since changed his name and now lives in the Copenhagen area, has admitted to being part of a volunteer unit created by the Danish Nazi Party.

Rasmussen told daily paper Berlingske that he only went to Bobruisk as a 17-year-old to undergo military training.

He said: ‘We were there to be trained as soldiers and the other (things) we had nothing to do with.’

He added: ‘Unfortunately the justice ministry chose not to deal with this… so therefore I have come to Copenhagen to submit the complaint myself.’

People like Rasmussen ‘are the last people on earth who should have any sympathy, because they had absolutely no sympathy for their victims, some of whom were older than they are today,’ he said.

Around 6,000 Danish Nazis volunteered for the Free Corps Denmark during the German occupation between April 1940 and May 1945.

Up to 1,000 Danes served in Bobruisk, where at least 1,400 Jews were killed, according to a book released in October last year by Danish historians Dennis Larsen and Therkel Straede.

A German court last week sentenced a former Nazi SS officer known as the ‘Bookkeeper of Auschwitz’ to four years in jail, in what was expected to be one of the last Holocaust trials.

Oskar Groening, 94, was convicted by a court in the northern German city of Lueneburg of accessory to murder in 300,000 cases of Hungarian Jews sent to the gas chambers from May to July 1944.

Reacting to the verdict, Dr Moshe Kantor, President of the European Jewish Congress, said the verdict and trial had been of ‘historic significance’.

He said: ‘Although more than 70 years have passed since the liberation of the Nazi death camps, this trial reminds us that there is no statute of limitations for those responsible for Nazi horrors and demonstrates the constant need to guard against anti-Semitism, racism and hate.

‘We welcome the opportunity it provides for us to educate a generation that is all too distant from the horrors of the Holocaust.’