Nazi Bookkeeper Trialed For His Crime. Former Nazi Guard Sentenced For His Role At Auschwitz 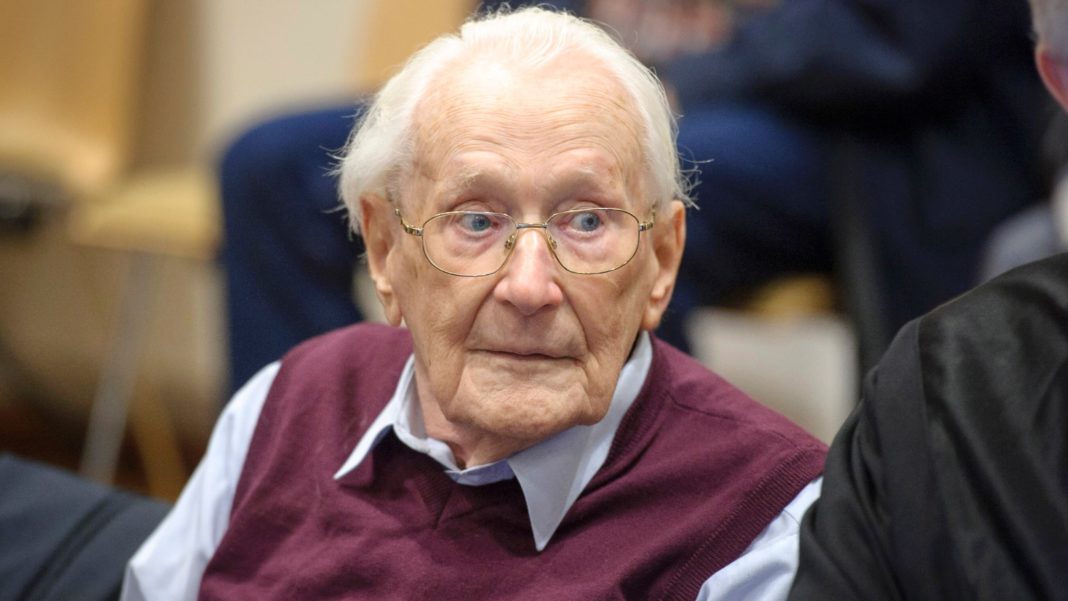 Former Nazi SS officer Oskar Groening, known as the Bookkeeper of Auschwitz, was sentenced earlier this month to four years in prison on 300,000 counts of being an accessory to murder during World War II.

The three-months trial revealed many horrific stories from Auschwitz, Nazi’s most infamous death camp, but most of the victims who took the stand claimed that they do not remember seeing Groening at the camp. The court nonetheless found the 94 year-old guilty for his essential role at the concentration camp.

During the trial, Groening admitted to his service at the camp and expressed guilt for his crimes, but denied any direct involvement in the killings. Judge Franz Kompisch ruled that Groening was “legally connected” to 300,000 cases of Hungarian Jews sent to gas chambers from May to July of 1944.

Judge Kompisch went on to say that Groening had voluntarily taken up a “safe desk job” designed purely for killing prisoners, a system that was “inhumane and all but unbearable for the human psyche.” His main responsibility in Auschwitz was to sort and count the money taken from the prisoners and then deposit it at the Nazi base camp in Berlin.

The court proceedings convened almost daily between April and June. Each session lasted three hours, after which Groening was taken back to the hospital. Due to his physical ailments, Groening had to be carried in and out of the courtroom.

Groening’s lawyers have announced that they fully intend to appeal the decision, hoping that Groening would never have to go behind bars.

President of the European Jewish Congress Dr. Moshe Kantor said that he welcomed the “verdict and the historic significance of the trial of Oskar Groening, and the opportunity it provides for educating a generation that is all too distant from the horrors of the Holocaust.”

“Although more than 70 years have passed since the liberation of the Nazi death camps,” Kantor continued, “this trial reminds us that there is no statute of limitations for those responsible for Nazi horrors and of the real and present danger of intolerance and demonstrates the constant need to guard against anti-Semitism, racism and hate.”

Among the co-plaintiffs were more than a dozen Holocaust survivors and relatives, who welcomed the verdict, calling it a “very late step toward justice.”

As the proceedings concluded with the defense calling for an acquittal, Groening seized a last opportunity to address the judge. Begging for mercy, he stated he was “very sorry” for his time stationed at the Nazi death camp, adding that “No one should have taken part in Auschwitz.”

Groening testified that the crimes he witnessed at the camp were so horrific that he asked three times to be transferred before he was finally moved to the front battle lines in October 1944.

In earlier interviews, Groening said he witnessed SS officers toying with a baby left at a station platform, ultimately kicking the baby to death. He said that he was only there to watch over the valuables confiscated and did not take part in the decision of who to send into the gas chambers. Prosecutors argued that by doing this, Groening helped maintain order at the camp, and thus created a smoother operation at Auschwitz. Defense attorneys Hans Holtermann argued that there was no proof that Groening “aided and abetted a crime.”

“Mr. Groening was never an accessory to the Holocaust,” Hotlermann said, “neither with his presence at the camp nor by transferring and counting money nor with any other actions, at least not in any legal sense.”

The defense team pled for clemency on grounds of Groening’s poor health and his willingness to testify in detail regarding the atrocities committed at Auschwitz, something many defendants of Holocaust war crimes had refused to do.

In the 1970s, after extensive criminal probes, German authorities had cleared Groening of criminal wrongdoing during his time at the concentration camp. This changed in 2011 when the trial of concentration camp guard John Demjanjuk reopened the legal foundation for prosecuting ex-Nazis. Demjanjuk was convicted solely on the reason of having worked at the Sobibor camp in Poland. Kurt Schrimm, a leading prosecutor of Nazi era criminals, said that cases against Nazi participants will continue.

Between 1940 and 1945, an approximate 1.1 million European Jews died in the Auschwitz camp before it was liberated by the Soviet army.