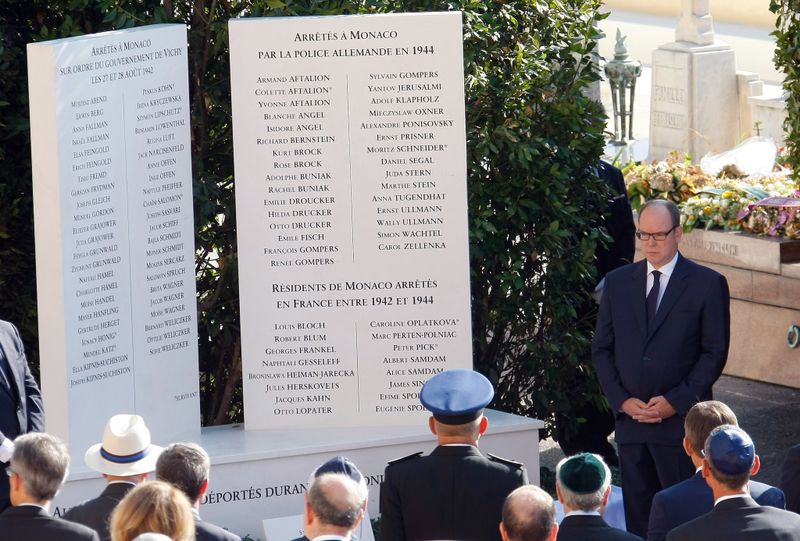 Monaco committed the “irreparable” injustice of deporting Jews to Nazi camps during World War II, Prince Albert II said Thursday in belated apology for the action 73 years ago that sent scores of residents and refugees to their deaths.

Many of the 66 people handed over to Nazi occupiers in neighboring France had sought refuge in the principality that was neutral in the first years of the war.

But on the night of Aug. 27, 1942, Monaco authorities rounded up Jewish residents and delivered them to the Nazis. At least 24 other Monegasques living in the Riviera principality or in the surrounding French countryside were deported during the war, according to a government report released this year. Only nine of the 90 who were deported survived their Nazi detention.

“We committed the irreparable in handing over to the neighboring authorities women, men and a child who had taken refuge with us to escape the persecutions they had suffered in France,” Albert said at a ceremony in which a monument to the victims was unveiled. “In distress, they came specifically to take shelter with us, thinking they would find neutrality.”

Albert said the acknowledgment of wrongdoing by the wartime authorities “is to ask forgiveness,” addressing his apology to Jewish community leaders in attendance, including the principality’s chief rabbi and renowned Holocaust researchers Serge and Beate Klarsfeld.

The government review of Monaco’s World War II relationship with the Axis powers was ordered by Albert and concluded this year with recommendations for establishing a restitution program to return the property seized from the deported Jews to their heirs. Nine compensation claims have already been approved, the government reported.

“We welcome the desire of the principality to properly examine its role during these dark days of the Nazi occupation,” European Jewish Congress leader Moshe Kantor said in a statement.

The Klarsfelds had encouraged Albert’s late father, Prince Rainier, to examine the wartime leadership’s actions. Albert took up the mission after succeeding Rainier, who died in 2005 after 56 years as head of the House of Grimaldi.

It was Rainier’s predecessor, Prince Louis II, who reigned during World War II, though under successive Italian and German occupations in the war’s latter years.