Majority Of European Jews Hide Religion In Public Out Of Fear, Survey Shows 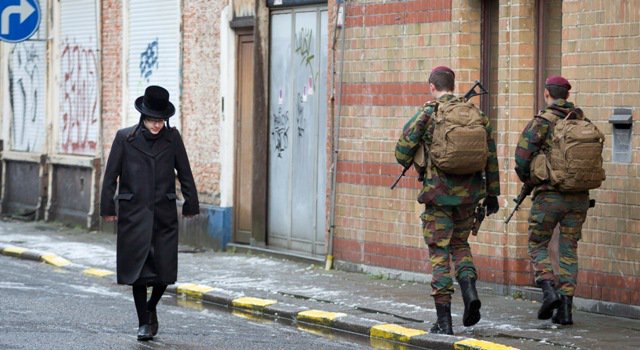 Most Jews conceal their religious identity on European streets. In fact, more than 85 percent fear bringing their children to synagogue for Jewish New Year services next week.

Anti-Semitism is rising across Europe, and reports on anti-Semitic attacks across the continent continue to stream, most recently from Holland and the United Kingdom.

Various monitoring groups have shown that there is a sharp increase in anti-Semitic incidents in Europe, and the result of this reality is manifest in a survey recently conducted by the Rabbinical Centre of Europe (RCE), showing that a large majority of European Jews choose not to reveal their religion in public.

Approximately 70 percent of European Jews avoid revealing their Jewish faith, according to the survey, which examined 179 Jewish communities in Western and Eastern Europe.

Furthermore, more than 85 percent of European Jews choose not to bring their children to synagogue on Rosh Hashana, the Jewish New Year, fearing anti-Semitic harassment or violence.

“Rabbis and community leaders from all over Europe report that more and more Jews refrain from publicly identifying” with their Jewishness, said Rabbi Menachem Margolin, head of the European Jewish Association (EJA).

Margolin also emphasized that European leaders have vowed to continue fighting the rise of anti-Semitic incidents across their continent. French President Francois Hollande has pledged to combat “all words and acts of an anti-Semitic nature, and to allow everyone to live together, without exception, with the same values of freedom, tolerance, and community.” Austrian President Heinz K. Fischer expressed his support for “the common interest of Jews in Europe,” while Belgian Prime Minister Charles Michel affirmed his “excellent relationship with the Jewish community in Belgium.” Dutch Prime Minister Mark Rutte called anti-Semitism a “scourge” that “affects Jewish communities first, but in essence it is a threat to society as a whole.”

“Europe is rightly talking a lot about the lessons learned from the Second World War in relation to the refugee crisis,” Dr. Moshe Kantor, president of the European Jewish Congress (EJC), said. “However, another lesson is that when Jews are beaten in broad daylight on our streets and in homes, then European tolerance is clearly on the wane.”

“Unfortunately, as usual, the Jews, unwillingly, act as a canary in the coal mine for Europe and these attacks are demonstrating once again that Jews are made to feel unsafe around the continent,” he added.

Data presented by the Scotland Yard on Monday also shows a spike in hatred of Jews in the UK.

Anti-Semitic crime surged 93 percent in the year leading to July, with 499 incidents recorded by police, compared with 258 the previous year.

“World events can also influence a rise in hate crime incidents, as can High Holy Days,” the Scotland Yard said in a statement.

Commander Mak Chishty of the Metropolitan Police Service stated: “We will not tolerate hate crime and take positive action to investigate all allegations, support victims and arrest offenders.”

“No one should suffer in silence,” he said, urging victims to report hate crimes “so we can act.”

Do You Support Israel?

Want to do something great for Israel today? Make a donation to United with Israel, and help to educate and inspire millions around the world to support Israel too!

We are a grassroots movement that fosters unity and love for the People, Country and Land of Israel. Every day we publish stories about Israel to educate, inspire and empower Israel supporters around the world. We contribute to vital causes like building bomb shelters and helping the needy. Donations from true friends of Israel like you make this possible, so please show your support today!