First Vice-President Of The European Commission Frans Timmermans: ‘Without The Jewish Community, Europe Will Cease To Exist’ 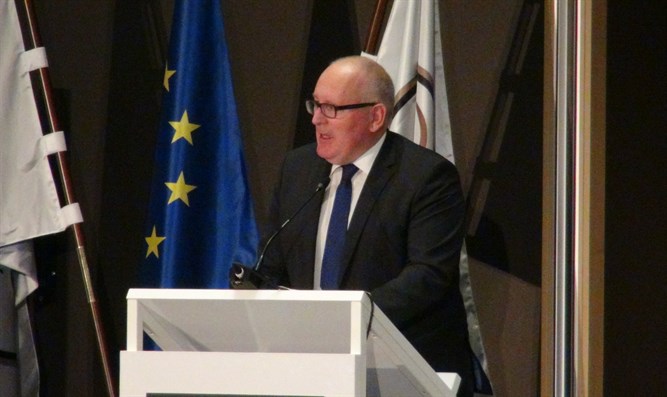 “Without the Jewish community, Europe will cease to exist,” European Commission Vice-President Frans Timmermans told participants of the first Annual Colloquium on Fundamental Rights organized by the EU Commissioon.

Addressing the opening of the two-day conference in Brussels, which focus on preventing and combating anti-Semitic an anti-Muslim hatred in Europe, Timmermans warned that ‘’Anti-Semitism, if left unchallenged will pose a great problem to our society.” ‘’Tackling anti-Semitism is essential for our society,’’ he added, noting that out of fear for their security European Jews are living Europe.

Timmermans also announced that he will himself take the position of EU Envoy on anti-Semitism and Islamophobia, within the framework of his current charge at the EU Commission. ‘’Two people in my desk will be devoted to these issues and will report to me,’’ he said.

The announcement comes as a recent report of the EU’s Fundamental Rights Agency (FRA) of anti-Semitic incidents in 2014, once again demonstrated a substantial rise in hate attacks on Jews across the continent. In France, the number of incidents more than doubled from 423 attacks in 2013 to 851 in 2014.

The report notes that “anti-Semitic and intolerant attitudes can lead to behaviour punishable by law, but anti-Semitism needs to be countered beyond the criminal justice system perspective.

Two-thirds of respondents to FRA’s survey on Jewish people’s experiences and perceptions of anti-Semitism consider it to be a problem in their country, and 76 % believe that during the past five years anti-Semitism has increased in the country where they live.”

Among the first to speak, European Jewish Congress (EJC) President Moshe Kantor sounded the alarm over the significant rise of anti-Semitism in Europe.

Noting that the issue of refugees ‘’is a great test for Europe,’’, he said, adding ‘’however, it is failing a greater test every day in Europe.’’

“If hundreds of thousands of Jews leave the European Union, which is becoming a very strong possibility, then it too will be judged a failure. Over the past few years, tens of thousands of Jews have left Europe to seek a safer home elsewhere, and today, one-third of Europe’s nearly 2.5 million Jews are considering emigration. Whole areas of Europe are being emptied of Jews and not enough is being done,’’ Kantor said.

He called for the immediate implementation of various steps to combat anti-Semitism, including the creation of a special EU Task Force on anti-Semitism, with a dedicated full-time Envoy, as they have in the U.S., France and Germany.

He also urged the establishment of a clear and officially recognized definition of anti-Semitism to be adopted by the EU, as well as new legislative powers to tackle hate, extremism and intolerance.

“Unfortunately, it seems that Jews are also unique in being one of the few victims of racism in Western society where the boundaries of what is considered hate are set by the perpetrators themselves and not the victims, Kantor said.

Kantor deplored that the 2005 ‘’‘Working definition of anti-Semitism’ releaed by the European Union Monitoring Center on Racism and Xenophobia (EUMC) has never been officially adopted and that the EU’s Fundamental Rights Agency recently taken the definition from its website, giving an unacceptable victory to those who worked extremely hard against its adoption.”

“The lack of a unified and clear definition means that anti-Semites will continue to act with protection and freedom, knowing that frequently they cannot be prosecuted,’’ Kantor said.