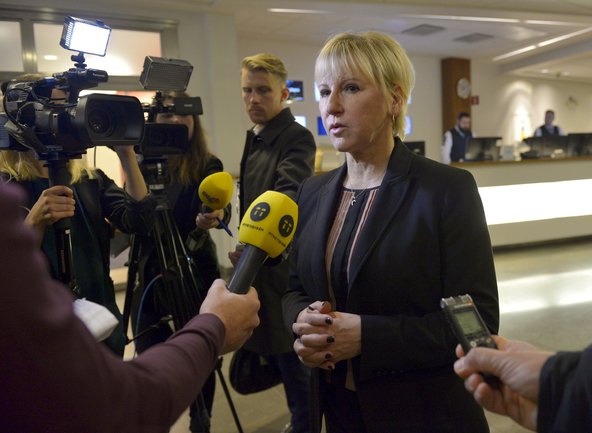 The director of Israel’s foreign ministry on Monday reprimanded the Swedish ambassador there over his foreign minister’s remarks suggesting that Palestinian hopelessness was connected to the terrorism that struck Paris.

The director, Dore Gold, told the ambassador, Carl Magnus Nesser, that “the people of Israel are deeply offended and insulted” by what Mr. Gold called “an odious statement that stands to injure the relations between our two countries,” according to a statement from his office.

“To suggest that that Palestinian issue has anything to do with this phenomenon is to advance a baseless myth,” said Mr. Gold, a former ambassador to the United Nations. “We are a country currently under assault, with attacks prompted by Palestinian incitement. Therefore, any implication of linking the Palestinian situation and a decision to turn to violence is unfathomable.”

He added: “A civilization that cannot distinguish between right and wrong erodes the foundation of our common cause.”

Sweden’s foreign minister, Margaret Wallstrom, in a weekend interview on Swedish public television, mentioned the Palestinians as an example when discussing root causes of radicalization.

“To counteract the radicalization, we must go back to the situation, such as the one in the Middle East of which not the least the Palestinians see that there is not future,” she said, according to a translation by the news site Times of Israel. “We must either accept a desperate situation or resort to violence.”

Sweden has increasingly become a leading European supporter of the Palestinians, straining its relations with Israel. Last October, it was the first Western European nation to officially recognize the state of Palestine, and in February, the Palestinians opened an embassy in Stockholm, their first in Western Europe.

On Twitter, Shurat HaDin, an Israeli law firm and advocacy group, reacted to Ms. Wallstrom’s statement by asking, “Remind me again why we maintain diplomatic relations?”

“The problem is not so much that Israel is once again blamed for events that it played absolutely no role in,” he said in a statement, but that “if some in the West continuously ignore the true motivations behind these terrorist attacks, they will never be able to prevent the next one.”

But the Swedish Embassy in Tel Aviv said in its own Twitter post that the foreign minister had “not said that Israeli Palestinian conflict is linked to tragic events in Paris.”

Erik Wirkensjo, Ms. Wallstrom’s press secretary, said in a telephone interview that her quote about the Palestinians was “completely taken out of context” from a 15 or 20 minute discussion.

“She never mentioned Israel,” he noted. “She simply said that radicalization is a problem, of course, and living in conflict can lead to radicalization.”