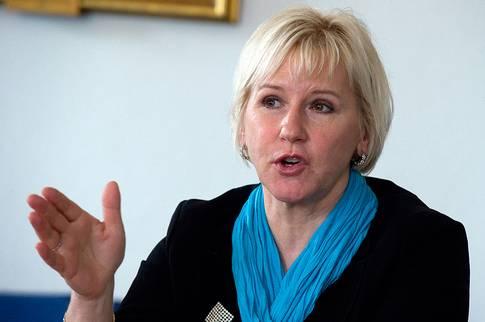 However the Swedish Embassy in Israel issues a clarification over Twitter, stating: “Swe FM has not said that Israeli Palestinian conflict is linked to tragic events in Paris”.

EJC President Moshe Kantor said her view was “borderline racist” because she focused on the one conflict involving Jews in explaining the attacks, whereas Israel said her comments were “appallingly impudent”.

When asked if she was anxious about the radicalisation of young Swedes to join Daesh, Wallström said: “Obviously, we have reason to be anxious, not just in Sweden but across the world – because there are so many that are being radicalised”.

Speaking to a Swedish TV channel shortly after the massacre in Paris, the foreign minister indicated she is concerned that Swedish youth will be radicalized to fight for the Islamic State group, also known as ISIS or ISIL, and that the situation reminds her of Palestinians who resort to violence because they see no future for themselves.

It was not the first time that Wallstrom has drawn a parallel between the Israeli-Palestinian conflict and the bolstering of radical movements in the Middle East.

“The Swedish foreign minister has consistently demonstrated bias against Israel and exhibits genuine hostility when she indicates a connection of any kind between the terrorist attacks in Paris and the complex situation between Israel and the Palestinians”, the Israeli Foreign Ministry statement said.

However, baseless statements from a senior European official like Wallstrom suggests Israel’s treatment of the Palestinians are a root cause of the latest terrorist attacks is especially concerning and needs to be condemned by the worldwide community.