International Nuclear Experts Call On U.S. And Russia To Form A Coalition To Tackle Threat Of Nuclear Terrorism 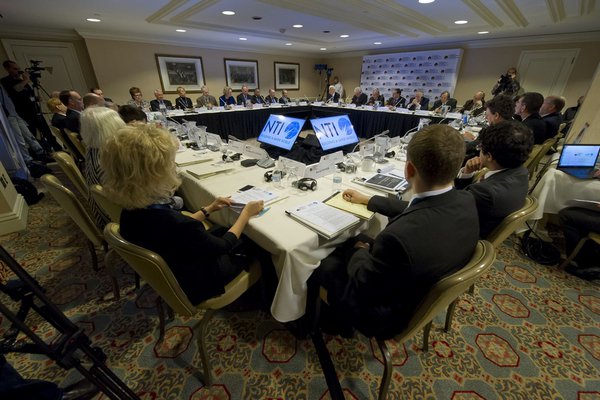 Joint conference, with the International Luxembourg Forum and the Nuclear Threat Initiative, on preventing a crisis in the control over proliferation of nuclear weapons and efforts against nuclear terrorism

Participants in the conference discussed immediate concerns and relevant issues as well as specific steps to achieve nuclear arms reduction, ways of jump-starting stalled negotiating processes, methods of fighting nuclear terrorism and boosting cooperation between the world’s leading nuclear powers. Discussions also looked at the role of arms control in strengthening international stability, and on how to better cope with the threats to the nuclear non-proliferation regime. Based on the outcomes of these proceedings, plans are in place to appeal to the leaders of Russia and the US containing proposals for resuming the dialogue in nuclear arms control.

“I was highly disturbed to hear the renowned international experts at today’s forum openly express strong concerns over the likelihood of nuclear dirty bomb being used by terrorists. We live in an age of unparalleled risks to global security. The current state of nuclear arms control has no precedents even in the Cold War era, let alone in the period since it ended. The Prague START Treaty that became effective in 2011 is now the only instrument of nuclear arms reduction that remains in force, while the permanent intermediate-range nuclear forces treaty is taking flak – if not yet a hammering – from both sides. The only way to prevent nuclear terrorism is to prevent terrorists from buying or stealing nuclear materials and making weapons of mass destruction. If the international community cannot unite against this shared threat, we are all at risk as these weaknesses provide opportunities for terrorists to exploit.

I believe that a joint conference with two of the most influential international organizations in the area of nuclear arms control – the Luxembourg Forum and the Nuclear Threat Initiative – represents a crucial landmark that may help jolt vital international dialogue on arms control out of stagnation, and allow the world to secure future peace and stability.”

The proposals by Dr Kantor discussed at the conference include:

– embarking on consultations on further cuts to the strategic offensive weapons, on transparency and control with regard to non-strategic nuclear arms as required by Article VI of the Nuclear Non-Proliferation Treaty;

– resolving the differences over the impact that the US BMD Defenses, the Russian Aerospace Defense, and the strategic high-precision conventional weapons may have on strategic stability;

– changing the conditions inherited from the Cold War era, which might trigger the use of US and Russian strategic offensive forces, by lengthening the decision time preceding a missile launch in a crisis.

– the leaders of Russia and the USA, the major countries of Europe and the world put efforts against nuclear terrorism at the very top of the international security agenda;

– the cooperation on all of the previously adopted nuclear terrorism initiatives and resolutions of the UN Security Council be immediately resumed and enhanced;

– the US, Europe, Russia and the Middle East nations should finally agree to closely coordinate and step up real action against the Islamic State;

– special services and operational agencies must cooperate, to the maximum degree possible, in uncovering and curbing any attempts to seize nuclear material and prepare nuclear terrorist attacks.

Following the conference, the Supervisory Board of the Luxembourg Forum will convene for a meeting to hear Luxembourg Forum President Moshe Kantor’s report on the work performed in 2015 and discuss future plans.

About The Luxembourg Forum

The International Luxembourg Forum on Preventing Nuclear Catastrophe was established by a decision of an International Conference to Prevent a Nuclear Catastrophe convening in Luxembourg on May 24-25, 2007. The Forum’s Advisory Council comprises 49 more credible and prominent international experts from 14 nations. The Forum is among the more representative NGOs bringing together leading international experts on nuclear non-proliferation, reduction and limitation of weapons. The President of the Forum is Viatcheslav Moshe Kantor. The Forum’s principal bodies are the International Advisory Council and Supervisory Board. The Forum’s key goals are to analyze threats arising from the proliferation of nuclear weapons and to develop specific suggestions and recommendations in a number of areas, such as continued reductions in nuclear weapons, strengthening nuclear and missile non-proliferation regimes, counteracting attempts at acquiring nuclear weapons and technologies.