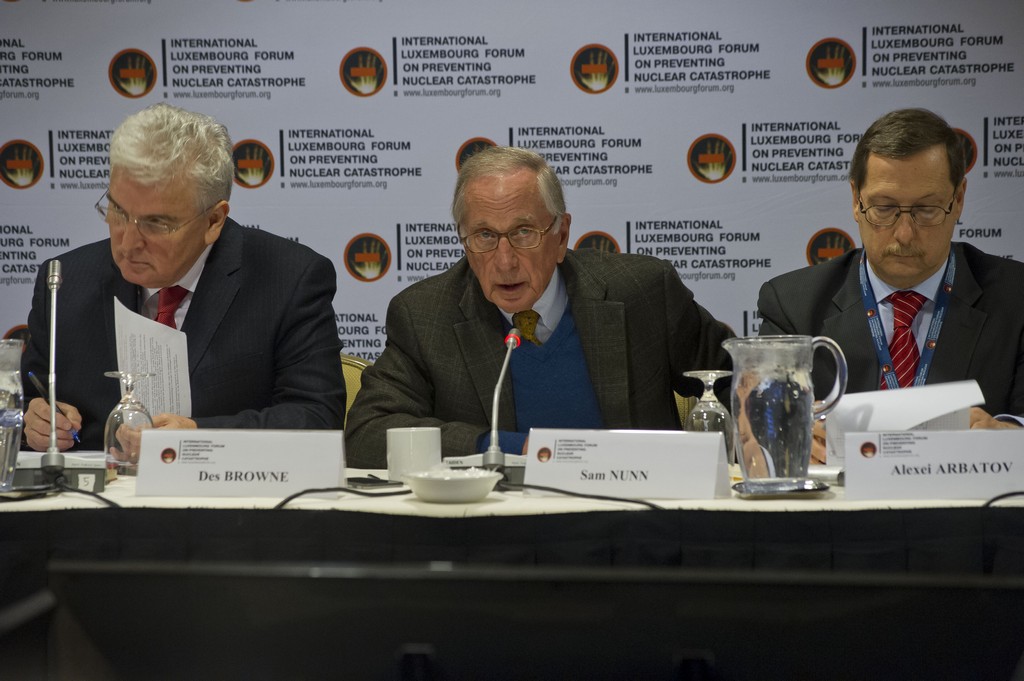 At a recent Joint Conference of the International Luxembourg Forum on Preventing Nuclear Catastrophe and the Nuclear Threat Initiative “Preventing the Crisis of Nuclear Arms Control and Catastrophic Terrorism”, which took place on the 1st of December, 2015 former Senator Sam Nunn, Co-Chairman of the Nuclear Threat Initiative made a speech where he put forward some pressing international issues. Highlighting the crucial role of a sound and open dialogue between Russia and the US, Senator Nunn urged international community to work on nuclear arms control and risk reduction process which in time will prevent nuclear and radiological weapons falling into wrong hands. Senator Nunn called for building trust, mutual respect and strong mechanisms of cooperation between Russia and NATO as a basis for peaceful and dynamic relations. This is especially vital due to the rising threat coming from ISIS and islamic terrorist groups scattered around the world.

Nuclear arms control and preventing catastrophic terrorism are issues that go to the core of NTI’s mission, and we are pleased to have the opportunity to jointly host this meeting with the Luxembourg Forum.

There is plenty to discuss and many challenges to address:

There is a corrosive lack of trust undermining cooperation between our U.S. and Russia leaders and nations.

Harsh, irresponsible rhetoric regarding nuclear weapons is being used.

There is no agreed process or an agenda for next steps on nuclear arms control and risk reduction.

Arms control experts in both the U.S. and Russia are disappearing as they retire and leave the scene. And with them go decades of expertise and experience that will be very difficult to replace.

While our stockpiles of nuclear weapons have decreased, tensions between the United States and Russia have never been higher since the end of the Cold War.

No doubt the crisis over Ukraine has severely damaged the U.S-Russian relationship, as well as cooperation across the Euro-Atlantic region.

This has led to political tensions, economic sanctions and even military dangers between the West and Russia – and an increasing risk of escalation, either intended or unintended. This is a very dangerous situation in a region with a high concentration of both conventional and nuclear forces. Now we have the Syrian civil war, the shoot-down of a Russian aircraft, and the absence of coordination against ISIS.

There a number of important questions that are worth reflecting on today:

Can our leaders still agree there can be no winners in a nuclear war?

Can our leaders still agree that strategic stability is of utmost importance to our bilateral relations?

Can our leaders agree to cooperate on common interests, like nuclear security and the fight against radical extremism?

And can our leaders set aside Cold War “zero-sum” thinking to advance our mutual security and reduce major risks?

I would add another question: Can our leaders and our citizens recognize that we are in a new era where nation-states no longer have a monopoly over weapons of mass destruction and disruption? The bottom line is that we are in a race between cooperation and catastrophe, and cooperation seems to be running backward.

As we all know, there are plenty of problems. As I view the next two days, we shouldn’t focus much on “who drove the ox into the ditch” but more on how to get the ox out.

Let me offer just a few thoughts on what the United States and Russia should do to start reducing these risks:

First, we’ve got to encourage our public officials to stop using irresponsible rhetoric regarding nuclear weapons and replace that rhetoric with mutual respect. Otherwise, we will end up on a path that will only lead to further escalation and higher risk. Prominent leaders must realize that reckless rhetoric creates an atmosphere that could lead to dangerous misunderstandings and miscalculations, including throughout the military chain of command.

Second, the United States and Russia should revive and strengthen channels of communication. We can no longer afford to treat dialogue as a bargaining chip. “You make us mad and we will punish you by not talking” is not a strategy for two countries that control 90 percent of the world’s nuclear weapons and materials. Continuous dialogue is essential between our military leaders and our Intelligence Community as well as the NATO-Russia Council.

Fourth, the United States and Russia should agree on confidence-building measures, including those in the now-defunct CFE Treaty, to reinforce strategic stability and further reduce the chances of miscalculation, including bolstering military-to-military communication, and utilizing more extensively the Nuclear Risk Reduction Centers that we set up decades ago.

Finally, the United States and Russia should collaborate in the fight against ISIS. The threat posed by ISIS directly affects the core national interests of both our countries. In particular, Russia and the United States need to work together to ensure that ISIS never acquires nuclear or radiological weapons. To do this, we need to revive cooperation between the United States and Russia on nuclear security – and promote intelligence cooperation between our two governments to identify and interdict illicit nuclear trafficking, including dirty bomb material.

I look forward to discussing these challenges with you all over the next two days.