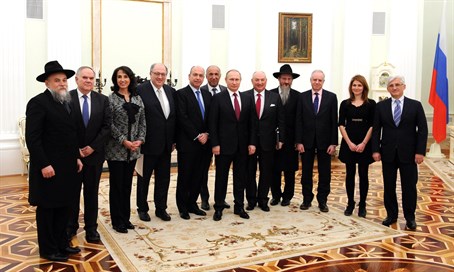 Europe’s beleaguered Jews ‘should come to us,’ Russian leader tells European Jewish Congress in the Kremlin

Putin made the offer on Tuesday in a meeting with members of the European Jewish Congress (EJC) that took place in the Kremlin. Moshe Vyacheslav Kantor, EJC president, complained to Putin about the rising anti-Semitism across Europe and the growing number of attacks against Jews.

“Statistically,” Kantor told his host, “the situation of the Jews in Europe is the worst it has been since the end of the Second World War and there is a very real prospect of an exodus of Jews from certain parts of Europe.”

According to Russian news outlet RT, Putin replied: “Let [the Jews] come to us then,” adding that “during the Soviet period they were leaving the country, and now they should return.”

Kantor reportedly called Putin’s proposal a “new fundamental idea” that the EJC will take up for debate.

Kantor had told Putin that ultra-right wing movements are “springing up like mushrooms” in Britain, France, Germany, Greece, Hungary, Sweden and Italy, and that the rise of Islamist extremism in Europe is prompting a mass exodus of Jews from the EU.

The purpose of the unusual law, it is widely understood, is the prevention of cynical advantage being taken of Biblical verses for anti-Semitic purposes.

Putin has long been known to oppose anti-Semitism, and violent attacks against Jews in his country have in fact been on the decline in recent years. He also conducts warm relations with Israel – even as he does the same with Iran.