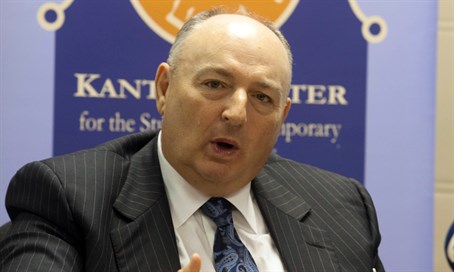 During the assembly, Dr. Moshe Kantor was reelected to another term as President of the EJC, and Jonathan Arkush, President of the Board of Deputies of British Jews, was elected as Chairman of the Council.

“I am delighted to have received a strong vote of confidence from the leadership of the European Jewish communities and it is a positive testament for the work we have done these last few years and the plan of action we have for the years ahead,” Dr. Kantor said. “The situation in our communities could be defined as the most difficult since the end of the Second World War.”

“The high level of Antisemitism, the crisis brought about by large numbers of migrants and asylum-seekers entering Europe, the wave of terror and the economic situation are all interconnected and present great challenges for European Jewry,” added Kantor, who has been an outspoken critic of rising anti-Semitism in Europe.

Dr. Moshe Kantor, 62, is a Jewish leader, philanthropist and businessman. He received his PhD in Sciences with a specialization in Spacecraft Automatic Control Systems.

Dr. Kantor was first elected President of the European Jewish Congress in 2007. He is at the forefront of key issues relating to Jews on the European continent. As President of the International Luxembourg Forum on Preventing Nuclear Catastrophe, a non-governmental organization uniting world-renowned experts on nonproliferation of nuclear weapons, he focused on the threat of a nuclear-armed Iran on global stability.

He has also been at the forefront of promoting tolerance and reconciliation in Europe, as Founder and President of the European Council on Tolerance and Reconciliation, a non-governmental organization composed of former heads of European states, Nobel Peace Prize laureates and other world renowned individuals.

He was awarded the highest level of the French National Order of the Legion of Honor last year by President Francois Hollande, in recognition of his work towards the rights of minorities, promoting interfaith relations, leading the fight against racism and anti-Semitism and working for a more tolerant Europe, and he has also received the Knight Grand Cross of the Order of Merit, Italy (2013) and the Order of Leopold, Belgium, (2008).

“We need to strengthen our communities, especially those under threat, and we need to seriously engage with our governments and with the relevant EU bodies and institutions to ensure they uphold their responsibilities for our security in all arenas,” Dr. Kantor said during the meeting. “We must not be only defensive; we must be also be proactive regarding these threats, and this may include criminalizing Antisemitism, even on the internet.”

“We also need to vigorously challenge and fight the BDS campaign, with is absolutely anti-Semitic in intent and effect, and seek ways to strengthen ties between the EU, European nations and Israel.”

To this end, the EJC approved a resolution to create an EJC Taskforce on BDS.