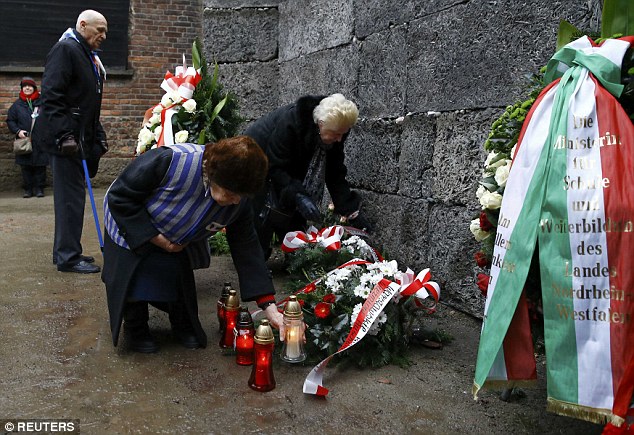 The president of the European Parliament has warned of rising anti-Semitism as Holocaust Memorial Day is marked around the world.

The Parliament held its annual Holocaust Remembrance Day with the European Jewish Congress on the 71st anniversary of the liberation of the Auschwitz death camp.

It came as Auschwitz survivors travelled to the camp in modern day Poland to lay flowers and remember the 1.1million Jews who were murdered by the Nazis.

But speaking at the memorial day event in Brussels today, Mr Schulz warned that many Jews across Europe still do not feel safe.

He said: ‘Jewish life is part of our culture and our identity. Without the Jews, Europe would not be Europe. Therefore it hurts that in today’s Europe, Jews again live in fear.

‘It is unacceptable that Jews are reluctant to wear their traditional clothes and display religious symbols in the public because of fear of reprisals and aggression.

‘It is saddening when Jewish people consider leaving Europe because they no longer feel safe.’

He added: ‘Our collective memory of the Holocaust is fading fast, but if we allow the horrors of the past to fade into history, we are doomed to make the same mistakes again.

‘We need more that just ceremony and commemoration. When anti-Semitism is on the rise, when Jews are once again fleeing Europe.

‘When a murderous Islamic extremist ideology is threatening our existence, we need action as well as words.

‘It is time for our leaders to commit to a robust, unified and coordinated approach to tackling anti-Semitism and Islamic extremism.

‘We must all stand against hate refuse to allow history to repeat itself, making ‘never again’ a reality.’

Dr Kantor also said that although Jews are starting to emigrate from Europe in large numbers, this trend can be stopped.

Dr Kantor explained: ‘I want to see a bright, secure and prosperous future for the Jews of Europe.

‘I believe it can happen and it will happen if we work together to take stronger steps against the sources of hate and violence which target us both.

‘Just as the Nazis crimes did not stop at the Jews, so it is with our enemies today.’

Holocaust Memorial Day takes place annually on January 27 and marks the day Auschwitz was liberated by the Soviets in 1945.

When they arrived at the camp, the found 7,000 people sick and dying while many others were sent out on a death march.

Millions of Jews were taken to the camp between 1942 and 1945 and were massacred in gas chambers.

It is thought 1.1 million people were killed by the Nazis at Auschwitz.

Nazi Germany, who were occupying Poland set up Auschwitz in 1940 as a labour camp for Polish prisoners, gradually expanding it into a vast death camp.

It contained three camps and at least 36 sub-camps, built on an isolated site outside the town of Oswiecim.

Auschwitz I opened in June 1940 for Polish political prisoners and above the entrance gate is the infamous ‘Arbeit macht frei’ (work makes you free) sign.

In October 1941, Auschwitz II was built in Birkenau, a short distance from the main camp. It was able to hold more than 100,000 prisoners and was the main site of mass killings.

It had gas chambers capable of killing thousands of prisoners a day and by 1944, 6,000 people a day were being killed.

Most of those who died in the camps were Jews, as Nazi leader Adolf Hitler wanted to create an aryan race.

It is estimated that 1.1million people died at Auschwitz including political prisoners, Soviet prisoners of war, Polish gypsies, homosexuals and people with disabilities.

Around 200,000 camp inmates survived the death camp when it was liberated on January 27, 1945 by Soviet forces, eight months before the official end of the Second World War.

Since its liberation a total of 750 of the 7,000 Nazi guards at the camp have been prosecuted and punished.