The Rise Of Europe’S Far-Right Threatens Peace On The Continent. Just Ask The Jews 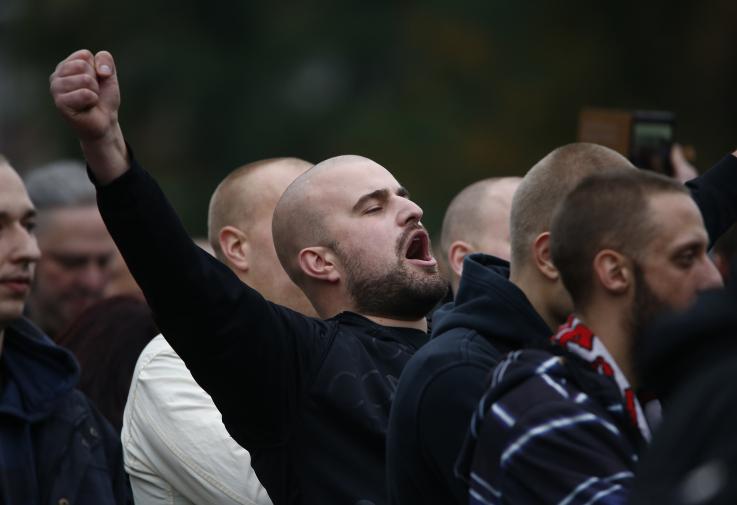 “Those who don’t know history are destined to repeat it.” These famous words, spoken by the great statesman Edmund Burke, are more relevant today than perhaps at any time in our history. The horrors of Europe’s Nazi past were once enough to deter people from supporting the far-right, but judging from recent events in Germany our collective memory is fading.

Today, Jews of Europe may not be the primary targets of far-right hostility. However, we are not far behind and would need communal amnesia not to watch developments with trepidation. When fascism and bigotry raise their ugly heads, Jews are never far down the list of targets. And once they come for the Jews, all freedom-loving people are at risk.

On March 13, the anti-immigration party Alternative for Germany, or AfD, made substantial gains in regional elections, marking a dangerous development in European politics. This is not an isolated incident. Earlier this month, the far-right People’s Party made striking electoral gains in Slovakia, and around Europe neo-fascist parties like Jobbik in Hungary, Golden Dawn in Greece and Marie Le Pen’s Front National in France are gaining in popularity. Britain has so far remained immune, but must not be complacent.

The AfD’s electoral success is not as yet enough to undermine fatally the progress made by Germany since the Second World War, from the most evil of regimes to arguably Europe’s greatest supporter of minority rights. However, the lurch to the far-right does promote the fragmentation and polarisation of a political landscape that is critical to the stability of the continent on the whole. Though the AfD is unlikely to join any government-all other parties have refused to form a coalition with it-the national debate is undoubtedly being pulled to the right, and the German agenda is being refocused on divisive policies that only serve to promote hatred and intolerance.

The rise of populist reactionary politics is not just a European phenomenon; indeed, the U.S. seems to be falling prey to similar worrying tendencies. With the fear-mongering, xenophobic rhetoric of Donald Trump seeing him lead the Republican nomination, to the extreme right-wing sentiments that allowed Marine Le Pen to dominate France’s regional elections in 2015, it may not come as a surprise that other electorates are following suit. However, this shift is dramatic when you consider that for almost 70 years German politics has been stabilized by a strong, centrist consensus that has rejected extremism and created one of the most tolerant, free and democratic nations on Earth.

This major shift in Germany marks a worrying break from the post-war Europe we fought so hard to build. If we look at the EU today, the right-wing nationalist parties may not be the largest but they are shouting loudly. They use their voices to distract debate, intimidate, instil fear and pull political dialogue to the right, ultimately seeking to polarize society into and “us and “them.” We must not let them.

The refugee crisis has presented many challenges for people in Germany and Europe as a whole, and many attribute the AfD’s success to these pressures. However, this does not diminish the severity of such a shift in voter sentiment. That Germany can now even consider supporting the far-right, given the horrors of the Holocaust signals a deeper change and it is very likely that worse is still to come.

Right-wing parties were traditionally marginalized in Germany and, unlike in many European nations, these parties played no part in government or policy formation. That the electorate is now responding so enthusiastically to right-wing populists and extremists borders on a crisis of democracy. The rejection of the mainstream parties ultimately shows the German people shunning stability in order to signal discontent. Far from being constructive, this move weakens our social fabric and presents new challenges to governing Europe’s largest economy.

It is clear that there are genuine grievances expressed by voters across the democratic world and these concerns-including economic stagnation, immigration and inequality-are certainly serious challenges that need to be addressed. A German TV poll last week found that 76 percent of the electorate thought that the main parties were “not taking their concerns about refugees seriously,” and another survey indicated a large percentage of AfD votes came from unhappy former supporters of Angela Merkel’s ruling Christian Democrats’ Union (CDU).

While the reactionary far-right parties may seem to offer an attractive alternative for some to the political status-quo, ultimately they do not propose constructive solutions and their hateful rhetoric divides peoples and encourages violence. I urge the electorates across the democratic world to heed the lessons of history. Intolerance and hatred can only lead to ruin. Just ask the Jews.

Moshe Kantor is the president of the European Jewish Congress.