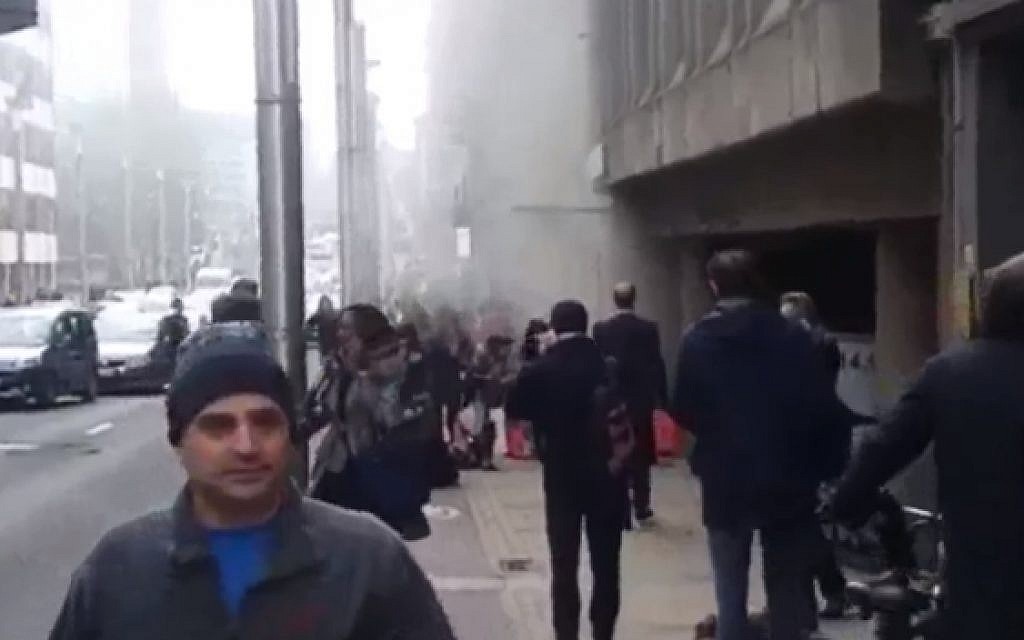 An Israeli Hassidic man was lightly to moderately wounded in one of the terrorist attacks that killed 34 people and injured dozens at Brussels’ airport and a metro station on Tuesday morning in Brussels, Belgium. He received medical treatment at a nearby hospital.

The man, who resides in Antwerp and was in Brussels for a wedding, was wounded in the airport attacks which left at least 15 people dead and dozens wounded. The explosions were carried out by a suicide bomber, Belgian media said.

Another Jewish person was moderately wounded, according to Samuel Markowitz, a paramedic for Hatzalah, a local Jewish emergency services organization. Among the hundreds of passengers who were evacuated to a safe area near the airport are several dozen Jews, he told Jewish magazine of Antwerp Joods Actueel.

Another Israeli, Yaakov Yeret, who also volunteers for Hatzalah, was at the airport synagogue during the attack.

He told the Times of Israel: “At the time of the explosion I was praying at the synagogue in the airport. We felt the explosion. We exited the synagogue in order to see what was happening and we joined the stream of the multitude of people who were being ushered by the police to exit the terminal. For the moment we are being kept at the other end of the airport and we are awaiting further instructions from the security forces at the scene.’’

The airport and a metro station located near the European Commission were targeted in the attack on the Belgian capital.15 people were killed in the metro.

Belgian Prime Minister Charles Michel says “what we feared has happened” and says authorities are worried there will be more attacks.

Speaking a news conference in Brussels, Michel says “there are many dead, many injured” from the attacks earlier Tuesday at the airport and a subway station. He says border controls have been reinforced.

Michel says “we realize we face a tragic moment. We have to be calm and show solidarity.”

On Friday, Salah Abdeslam, a main suspect in the Paris terror attacks in November, was captured during a raid on a flat in Molenbeek, a district in Brussels known, as a hotbed for jihadism and terrorists.

The blasts at the airport and metro station occurred four days after the arrest in Brussels of Salah Abdeslam, a suspected participant in November terror attacks in Paris that killed 130 people. Belgian police had been on alert for any reprisal action.

After Tuesday’s attacks, Jewish schools in Belgiumhave begun calling parents to have them pick up their children.

Earlier in the day, Jewish schools in Belgium had been placed on lockdown, but in light of the security situation, parents have now been contacted to take their children home.

Community leaders are discussing the possibility of cancelling school tomorrow and Purim street festivities planned for Thursday. Shortly thereafter, similar instructions went out from the Belgian government’s crisis center to all of the country’s schools. University students were instructed to refrain from coming to campus.

The Antwerp World Diamond Center cancelled a Purim party it planned for tomorrow “out of respect for the victims and their families,” the center’s CEO, Ari Epstein, told Joods Actueel.

Another Purim party by the European Jewish Association was cancelled in Brussels, the group’s director, Rabbi Menachem Margolin, said.

Israel’s Public Security Minister Gilad Erdan expresses his condolences to the victims of the attacks and wishes a speedy recovery to the wounded.

“This is the same terror that we saw in Paris, in San Bernadino and in Istanbul. The free world must work together to fight terrorism,” he said at the sidelines of a conference at Bar-Ilan University.

Kenneth Bandler, director of media relations for the American Jewish Committee, links the attacks to the slaying of four people at the Jewish Museum of Belgium in May 2014. “What began with the jihadist fatal attack on the Jewish Museum nearly two years ago has now reached the airport and metro,” he writes in an email about the Tuesday morning attacks in Brussels.

“This is yet another shocking, appalling and deadly attack on innocent Europeans by radical terrorists,” European Jewish Congress President Moshe Kantor says in a statement. Kantor calls the attacks “shots at the heart of Europe” that should galvanize counter-terrorist actions.

Britain’s Chief Rabbi Ephraim Mirvis said: “Once again, with inhuman brutality and disregard for the sanctity of life, terrorists have murdered and maimed innocent men and women in Europe.

“But, while they rejoice in the pain that that they have visited upon us, we will not be cowed. If anything, they have strengthened our commitment to the values of peaceful coexistence, democracy, the rule of law and human dignity.

“Our resolve cannot be broken by terror, whether it strikes in Israel, Turkey, Paris or Brussels.”

A Board of Deputies spokesman said: “These heinous attacks, which are sadly becoming disturbingly common on our continent, highlight the absolute necessity of robust international co-operation in the fight against trans-border terror.

“Great responsibility also lies with European societies to stand united in the face of a vicious and divisive ideology.