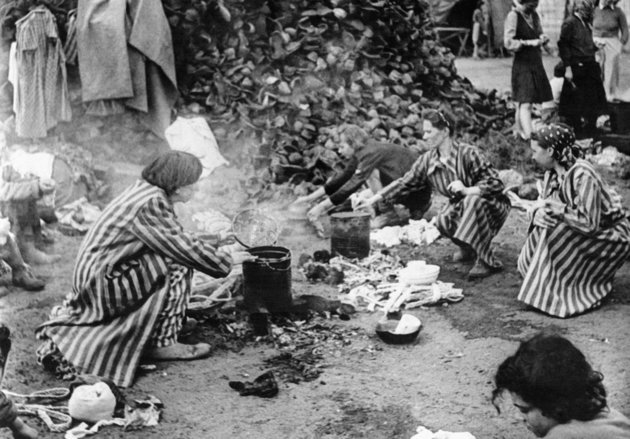 Tales of “rampant” cannibalism in a German concentration camp and torture are among stories of harrowing brutality recounted by victims of Nazi persecution, revealed in newly released files.

Detailed applications for financial assistance made in the 1960s by UK victims of Nazi persecution and their families have been released by the National Archives for the first time.

For many, filling in the applications marked the first time they had confronted the horrors of their past but compensation was far from guaranteed – only British citizens who spent time in a concentration camp or similar and would get payments.

Among the files released by the National Archives at Kew, west London, is an application from Harold Le Druillenec, the only British survivor found at the Bergen-Belsen concentration camp, who went on to give evidence at the Belsen Trials.

He was arrested in Jersey, which the Nazis occupied during the Second World War, for helping his sister harbour an escaped Russian prisoner of war, having a radio and for “non-co-operation” with German forces.

He was interned in three camps before being the first prisoner liberated from Belsen on April 16, 1945.

In a moving handwritten medical note requesting disability compensation, he said: “I survived three concentration camps by a lot of luck and the ability to ‘live outside the carcase’. I retain this trait.

“Rarely do I admit, even to myself, any physical weakness, ailments or discomforts and only see a doctor when it is imperative to do so. The filling-in of this form has been somewhat of a trial and I apologise for any incompleteness therein.”

Le Druillenec said that “by day cannibalism was rampant” in Bergen-Belsen.

In Neuengamme, he said he lived alongside “hardened” criminals and many men “laboured to the death for the ultimate benefit of the Greater Reich”.

3 Methods of murder including crucifixion and drowning

He described Banter Weg, in Hamburg, as “a tough camp with torture and punishment the rule day and night. Means of putting inmates to death included beating, drowning, crucifixion, hanging in various stances …”

He said that in Belsen, “jungle law reigned among the prisoners; at night you killed or were killed.”

Over 10 months of imprisonment, he lost more than half his body weight, and spent almost a year recovering from the dysentery, scabies, malnutrition and septicaemia he suffered.

At Belsen, Le Druillenec recalled: “All my time here was spent in heaving dead bodies into the mass graves kindly dug for us by ‘outside workers’ for we no longer had the strength for that type of work which, fortunately, must have been observed by the camp authorities.”

He added: “The bulk of Auschwitz had been transferred to Belsen when I arrived and it was here that I heard the expression ‘there is only one way out of here – through the chimney!’ (crematorium).

“All in all a most unpleasant place, with the liberation of the camp coming not a moment too soon for me, for I had reached the stage of being a ‘musselman’ (Belsen expression for ‘a Gandhi’) which, in those circumstances, meant death within hours.”

He interrupted his convalescence to give evidence against camp staff at the Belsen Trial in Luneburg in 1945 and went on to help the War Crimes Investigations teams as they examined atrocities at other concentration camps.

In his application for compensation he described how his experiences had left him “generally weak”, with his heart and lungs affected and how he had lost most of his memories of pre-war life.

He wrote of his life back in Jersey: “All in all I am in good shape but must needs live a quiet life”.

The Foreign Office eventually agreed to pay him compensation, awarding him £1,835 – around £30,000 today – for the time he spent imprisoned and his disabilities, which were deemed to be “less than 50%”.

This experience was shared by many.

In 1964, the West Germany Government agreed to pay the British Government £1 million – about £17 million in today’s money – to those who had suffered, or their dependants if they had died, The Press Association reports.

More than 4,000 people applied and the Foreign Office awarded 1,015 of them compensation.

Dr Moshe Kantor, President of the European Jewish Congress, said: “These devastating accounts expose the ugly details of the extreme brutality suffered by the Jews, reminding us of the individual lives that were taken during the Holocaust. They must serve as a warning of the atrocities that society is capable of and should compel us to work to make ‘never again’ a reality.”