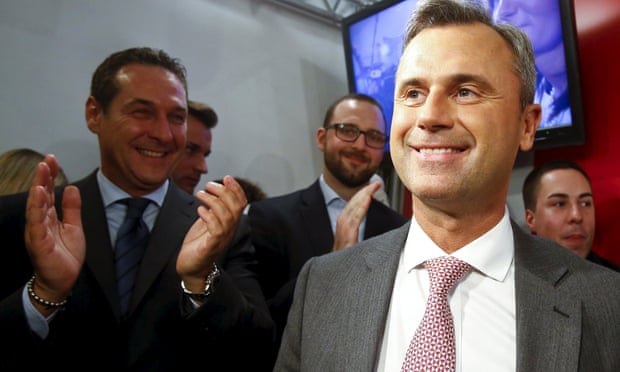 Freedom party’s Norbert Hofer, who won 36% of vote, has threatened to dissolve parliament before 2018 elections

Austria is braced for political turmoil with fears that the landslide victory for a rightwing populist and gun-carrying candidate in Sunday’s first-round presidential vote could trigger snap elections.

Norbert Hofer, of the rightwing Freedom party (FPÖ), defied pollsters’ predictions to beat the Green party’s Alexander Van der Bellen into second place, gaining 36% of the vote. The two candidates will go head to head in a run-off ballot on 22 May.

While the presidential post is mainly a ceremonial role, Hofer has threatened to make use of a right to dissolve parliament before the 2018 elections, warning other candidates in a TV debate that “you will be surprised by what can be done [by a president]”.

Hofer, a youthful 45-year-old who is partially paralysed after a paragliding accident, has campaigned for disability rights and is seen as having lent a friendly face to a party that balances virulently anti-immigration and Eurosceptic messages with leftist stances on welfare issues, led by firebrand Heinz-Christian Strache.

Hofer, who claims to protect himself in the “uncertain times” of the refugee crisis by carrying a Glock gun, scored overwhelming victories in all of Austria’s states apart from Vienna. In Styria, Burgenland and Carinthia – border states most affected by the refugee trail from the Mediterranean to central Europe – Hofer managed to gain 40% or more.

Some constitutional experts question whether Austria’s president would be able to dissolve parliament without the orders of the government, though since the presidential role has previously only ever been filled by politicians from the two main centrist parties, the situation is without precedent.

On Sunday night, while describing the result as a “rendezvous with history”, Hofer made clear that he regarded the result as an “intermediary step” on the way to a wider challenge to Austria’s political system.

The FPÖ is also leading polls for the parliamentary elections, with about 30% of the vote.

Should the FPÖ manage to return to government, it would ring alarm bells across the continent, with Austria joining a growing bloc of countries led by authoritarian and Eurosceptic governments , which includes Hungary and Poland. Hofer has signalled he would refuse to sign the Transatlantic Trade and Investment Partnership agreement with the US even if it was passed by his government.

Sunday’s result was welcomed by far-right politicians across Europe, including Geert Wilders in the Netherlands and France’s Marine Le Pen, as well as politicians from Italy’s Lega Nord and Germany’s National Democratic party. Italy’s prime minister, Matteo Renzi, warned that the result could have consequences for the border region between Austria and Italy. “It would be a problem for Europe if the Brenner pass would be closed,” he said.

Whatever the outcome on 22 May, it will be the first time since 1945 that the country’s president has not come from the two centrist parties, the Social Democrats (SPÖ) and the People’s party (ÖVP), who barely managed to scramble together a quarter of the vote.

Second-placed Van der Bellen is an outsider candidate in his own right who ran for office without the official endorsement of the Green party and has criticised the Austrian government’s cap on asylum seekers. The 72-year-old veteran will now hope for endorsements from the mainstream parties to block Hofer’s rise to power.

Johannes Pollak, a political scientist at the Institute of Advanced Studies in Vienna, said Van der Bellen was a marginal favourite to win. “The established parties will do their best to stop a rightwing populist from coming to power. But after this political earthquake, it is hard to make a certain prognosis.”

Reinhard Heinisch, professor of political science at Salzburg University, said the momentum was on the side of the rightwing candidate. “Especially if the FPÖ manages to frame the next round of the election around a polarising issues – for or against refugees, for example – the establishment parties face an uphill battle,” he said.

“On the surface, the situation may look similar to that in the US, but in America even the leftwing candidate Bernie Sanders has embraced a reformist agenda. In Austria, only the right has spelled this out.”

Columnist Gerfried Sperl in Der Standard wrote: “A weakening of the parliament, an end to the division of powers, opposition to Brussels and a curtailing of the freedom of press: Vienna would not only be geographically located east of Prague, but politically too.”

Moshe Kantor, president of the European Jewish Congress, described the Freedom party’s rise as “deeply troubling”. “That a country at the heart of Europe can show such support to the far right barely 70 years on from the Holocaust shows that our collective memories are failing,” he said.

Austria’s Social Democrat prime minister, Werner Faymann, who faced calls to resign after the vote, said the result was a “clear signal to the government that we have to cooperate more strongly”.

But many commentators say the crisis of the political establishment in Austria has much to do with the fact that the two centrist parties have governed the country in a “grand coalition” for the past 10 years.

“The message for SPÖ and ÖVP is simple: your time is up,” Viennese daily Die Presse commented. “After this Sunday we know for good: voting patterns in this country have radically changed. At least half of all votes are up for grabs and have nothing to do with factions and alliances. The candidates or groups that win are the ones who offer solutions, or at least pretend to offer them, or at least provide the right characters at the right time.”

Some critics say the Austrian government lost its credibility during the refugee crisis. After initially supporting the German chancellor, Angela Merkel’s open-border stance last October, the coalition government and in particular the conservative foreign minister, Sebastian Kurz, emerged as key drivers behind the closure of the Balkan route earlier this year.