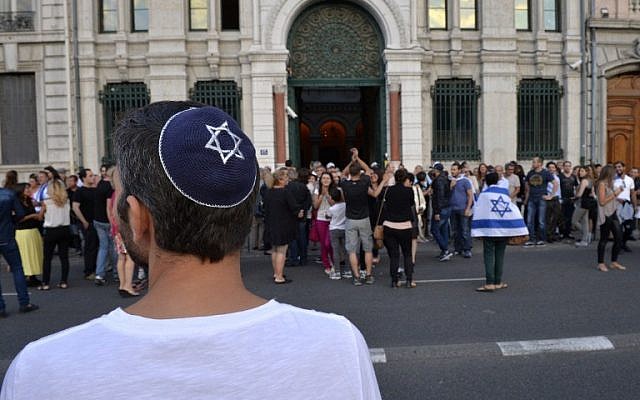 Anti-Semitic incidents reached a 10-year low in 2015, according to researchers at Tel Aviv University’s Kantor Center for the Study of Contemporary European Jewry.

In a report published Wednesday, on the eve of Holocaust Remembrance Day, the researchers said they had monitored 410 violent anti-Semitic incidents worldwide in 2015, a drop of 46 percent from the previous year’s 766.

The report noted the steep drop was due in part to a dramatic spike in attacks in 2014 amid the summer war between Israel and Hamas in Gaza.

“The number of violent cases in 2015 is more or less equal to that of 2011,” an executive summary of the report notes.

Nevertheless, the figure marks the lowest number recorded by the researchers in a decade, a fact the report attributes to heightened security measures taken in European countries with Jewish communities – especially France – following multiple jihadist terror attacks targeting Jews in 2015.

Thus researchers found that attacks against synagogues dropped by some 70% between 2014 and 2015, alongside declines in attacks against Jewish individuals, community centers and schools, all of which, they noted, have seen their security bolstered by authorities throughout Europe.

At the same time, attacks actually increased against unprotected sites, including Jewish cemeteries and memorials, which together made up the largest category of attacks.

The importance of state action to protect Jews is also highlighted by the situation in Germany, where incidents against Jewish individuals declined by a third, but the number of complaints over anti-Jewish incitement, especially online, “is quite high.”

The researchers noted that the situation of the Jews is tied to changes taking place in European politics in the wake of an unprecedented wave of Muslim immigration to the country and the ensuing rise of far-right parties.

Thus, 17 hate crimes were recorded against German Jews in 2015, while over 3,000 were counted against refugees just in the first 10 months of 2015, a 40% jump from the previous year. While the number is partly explained by the smaller population of Jews in the country, researchers said the figure for attacks against Muslim refugees is likely much higher than 3,000, as “most of the refugees do not know yet how to file a complaint.”