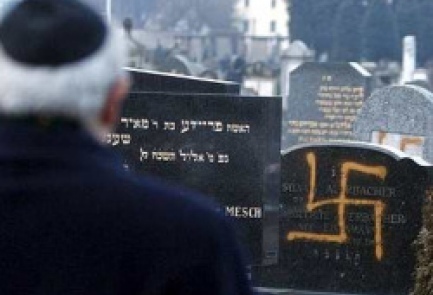 Tel Aviv University report finds fall in number of violent attacks against Jews around the world in 2015, but attacks are more brutal • Many European Jews are reconsidering their futures in their countries due to hostile atmosphere, report says.

A new report has found a drop in the number of violent attacks against Jews last year, but said the number remains high and that “institutional anti-Semitism” is on the rise.

Tel Aviv University’s Kantor Center for the Study of Contemporary European Jewry says it tracked 410 violent cases of anti-Semitism across the globe last year, down nearly 50% from 2014. The study was prepared with the European Jewish Congress.

However, Moshe Kantor, the group’s president, says the results were not all encouraging. He says that 2014 was the worst year on record. He believes attacks went down because of heightened security following the deadly attack at a kosher market in Paris in January 2015.

“Recent developments brought down the number of violent anti-Semitic cases perpetrated against Jews and Jewish sites … but the violent cases turned more cruel and murderous, in numbers unknown before; direct threats to gun down Jews escalated; the increasing flow of verbal and visual anti-Semitic expressions, mainly on social media, turned more threatening and insulting, while the legal struggle is in its beginning stages,” Tel Aviv University, the Kantor Center for the Study of Contemporary European Jewry and the European Jewish Congress said in a joint statement released about the report.

The report said, “It should be stressed that despite the decrease in the number of violent cases, many Jews [in Europe] reconsider their future and their sense of belonging in their respective countries, because of the significant increase in 2015 in anti-Semitic verbal and visual attacks via social media and the internet at large, creating a hostile atmosphere.”