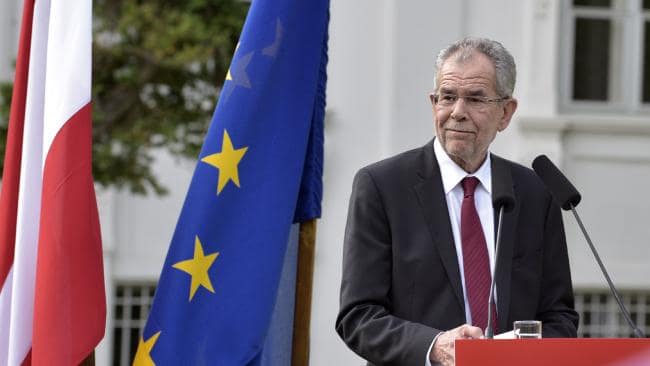 Austria has elected an independent, former Greens, economic professor as president in a knife-edge win over the far-right that will not ease fears over Europe’s lurch to political extremes.

Mr Van der Bellen, 72, now faces the challenge of reuniting a country bitterly divided over ­Europe’s migrant influx. However, he foreshadowed another crisis by vowing to refuse to ­acknowledge the Freedom Party if it wins the next general election, due in 2018.

The presidential role is largely ceremonial, but it carries significant constitutional authority that would allow Mr Van der Bellen to carry out his threat.

Freedom Party leader Heinz-Christian Strache is ahead in polls as Austrians worry about declining standards of living.

“This is just the beginning. The start of a new era in our democracy, towards more direct democracy and binding referendums,” Mr Strache said.

But Van der Bellen moderated his language in an election victory speech in the gardens of ­Vienna’s Palais Schonburg, saying the near dead-heat intensified responsibility for himself and Mr Hofer. He said the two halves of the country were equally important and “together we make up this beautiful Austria”.

He acknowledged the deep rift throughout the country. “We need a different culture of dialogue and a political system which deals with people’s fears and anger,” he said.

Mr Van der Bellen had pitched himself to voters as the lesser of two evils.

“I ask all those who don’t like me but perhaps like Hofer even less to vote for me,’’ he said during the campaign.

Mr Hofer was ahead after preliminary counting, but the postal votes, which leaned to city ­workers, got Mr Van der Bellen across the line.

Nonetheless Austria’s pull to the extremes – the two centrist parties that have shared power since World War II were rejected in the first round of voting – has given Europe a sharp wake-up call. French Prime Minister ­Man­uel Valls said: “It’s a relief to see the Austrians reject populism and extremism. Everyone in ­Europe must draw lessons from this.”

Moshe Kantor, president of the European Jewish Congress, had noted before the vote that collective memories were failing if a country in the heart of Europe could support the far-right barely 70 years after the Holocaust.

“While we are certainly satisfied with the result, there is little room to celebrate the high level of support for someone with such extremist views,” Mr Kantor said yesterday. European Parliament president Martin Schulz had warned that a win for Mr Hofer would “change the character of Europe’’.

Mr Van der Bellen is a strong proponent of the United States of Europe concept and will acquiesce to German Chancellor ­Angela Merkel’s call for open borders and free movement within Europe.

His election means the controversial plans for a permanent border check barrier at the Brenner Pass at the Italo-Austrian border may be shelved, encouraging a new wave of migration into Europe across the Mediterranean and over the mountains.