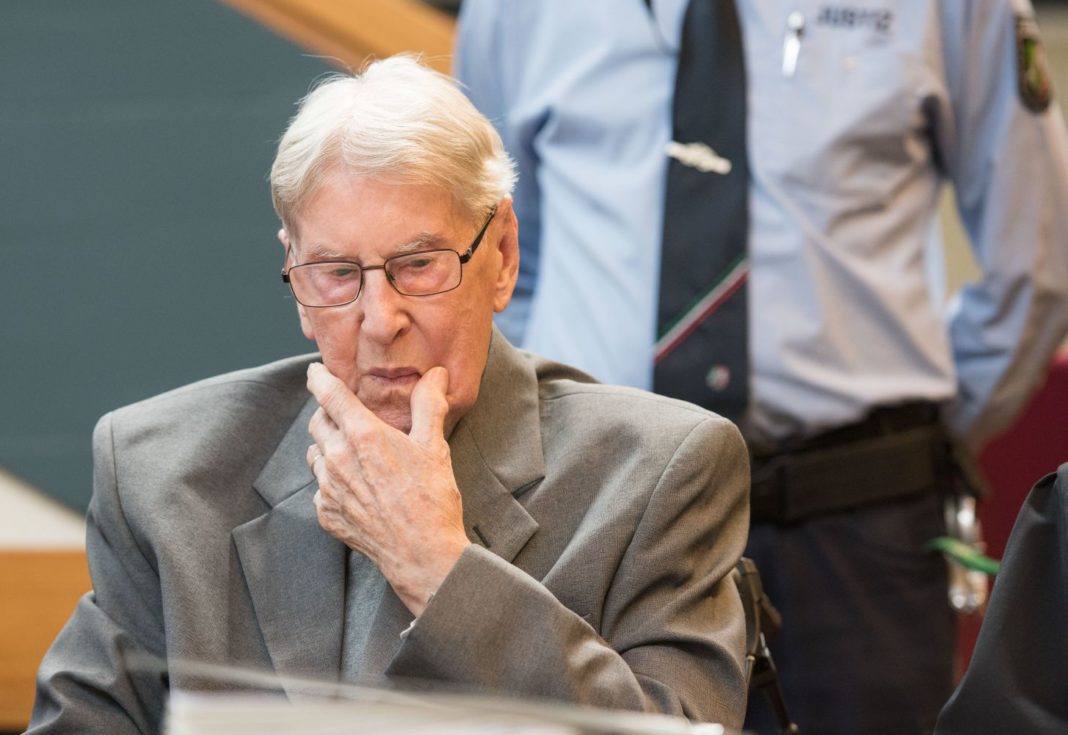 A 94-year-old former Auschwitz guard has been convicted of being an accessory to the murder of at least 170,000 people, at the end of what is likely to be one of Germany’s last Holocaust trials.

Reinhold Hanning was sentenced to five years’ jail for facilitating the slaughter at the death camp in Nazi-occupied Poland, having served at Auschwitz during the Second World War between January 1942 and June 1944. He had faced a maximum sentence of 15 years.

During his four-month trial, Hanning admitted serving as an Auschwitz guard. He said he was ashamed that he was aware Jews were being killed but did nothing to try to stop it.

Hanning showed no reaction as the judge, Anke Grudda, read her justification for the verdict and sentence.

“You were in Auschwitz for two and a half years, performed an important function. … You were part of a criminal organisation and took part in criminal activity in Auschwitz,” she said.

The nearly four-month long trial in Detmold included testimony from around a dozen Holocaust survivors, many of them extremely elderly, who detailed their horrific experiences, recalling piles of bodies and the smell of burnt flesh in the death camp.

“It is a just verdict, but he should say more, tell the truth for the young people,” said Leon Schwarzbaum, a 95-year-old Auschwitz survivor from Berlin who had spoken at the trial.

Mr Schwarzbaum added that he does not want Hanning to go to prison and is happy that he apologised, but had hoped that he would provide more details about his time in Auschwitz for the sake of educating younger generations.

Auschwitz survivor Hedy Bohm, who came from Toronto to testify at the trial and for the verdict, said she was “grateful and pleased by this justice finally after 70 years.”

“It is my dream to be in Germany, in a German court, with German judges acknowledging the Holocaust,” the 88-year-old said.

The defence had said Hanning should be acquitted as the former SS officer had personally never killed, beaten or abused anyone.

Hanning is said to have joined the Hitler Youth with his class in 1935 at age 13, then volunteered at 18 for the Waffen SS in 1940 at the urging of his stepmother. He fought in several battles in World War II before being hit by grenade splinters in his head and leg during close combat in Kiev in 1941.

He told the court that as he was recovering from his wounds he asked to be sent back but his commander decided he was no longer fit for front-line duty, and so sent him to Auschwitz, without his knowing what it was.

Speaking at the trial at end of April, Hanning apologised to the victims, saying that he regretted being part of a “criminal organisation” that had killed so many and caused so much suffering.

“I’m ashamed that I knowingly let injustice happen and did nothing to oppose it,” he read from a prepared speech.

Hanning was not charged with direct involvement in any killings. But prosecutors and dozens of joint plaintiffs from Germany, Hungary, Israel, Canada, Britain and the United States said he had helped Auschwitz function. The indictment against him is focused on a period between January 1943 and June 1944 for legal reasons, but the court has said it would consider the full time he served there.

A precedent was set in a similar case in 2011, when camp guard Ivan Demjanjuk was convicted. Last year, Oskar Groening, known as the “bookkeeper of Auschwitz”, was sentenced to four years in prison after he was convicted of being an accessory to the murder of 300,000 people.

None of the convictions are definitive. Demjanjuk had appealed but died before the German Federal Court of Justice ruled on the case, and the court is still considering an appeal filed by Groening.

Both sides in Hanning’s case have a week to appeal Friday’s verdict, and Hanning will remain free while any appeals are heard. The defence had asked for a six-year sentence.

Germany is holding what are likely to be its last trials linked to the Holocaust, in which the Nazis killed more than six million people, mostly Jews.

Besides Hanning, one other man and one woman in their 90s are accused of being accessories to the mass murder at Auschwitz. A third man who was a member of the Nazi SS guard team at Auschwitz died at the age of 93 in April, days before his trial was due to start.

Dr Moshe Kantor, President of the European Jewish Congress, welcomed the news. “We must once again use this opportunity to educate about the horrors of the Holocaust and show that hatred, fascism and anti-semitism must be rooted out. It should never be too late for the guilty to be held to account,” he said.