Abbas To E.U. Parliament: ‘Once The Occupation Ends, Terrorism Will Disappear’ 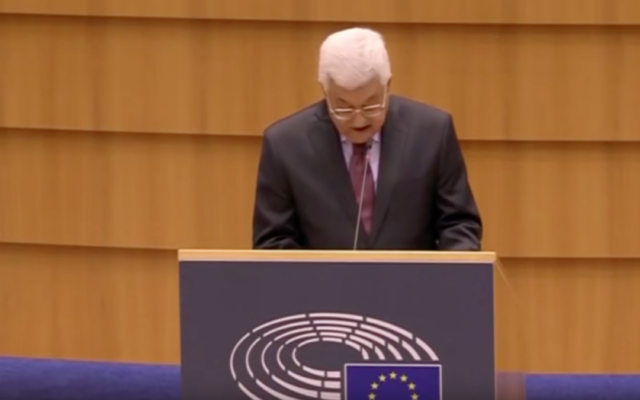 American and European Jewish leaders have criticised Palestinian President Mahmoud Abbas after he told the European Parliament that worldwide terror would come to an end once the Israeli occupation was over.

“Once the occupation ends, terrorism will disappear, there will be no more terrorism in the Middle East, or anywhere else in the world,” he said, to applause in the chamber.

Advocates from the American Jewish Committee (AJC) in New York and heads of the European Jewish Congress in Brussels were quick to denounce the speech, in which Abbas repeated an alleged plan by rabbis to poison Palestinian wells.

AJC chief executive David Harris said the Palestinian leader’s “malicious attack contradicts any attempt he made to verbally offer a hand for peace,” noting that Abbas refused to meet Israeli President Reuven Rivlin during his visit.

On the subject of Abbas’s statement that worldwide terror stemmed from the Israeli occupation, Harris added that this was “patently absurd”.

In Brussels, EJC chief Moshe Kantor picked up on Abbas’s story about rabbis plotting to poison Palestinian drinking water, saying: “It is unconscionable that a foreign leader proudly states a blood libel in the European Parliament and receives a standing ovation.”

Abbas received a warm reaction from MEPs throughout his speech, in which he accused Israel of “turning our country into an open-air prison,” reiterated his support for a two-state solution and asked European lawmakers to protect Palestinians from “provocations”.

European Union states have given varying levels of support to the most recent diplomatic push to restart Israeli-Palestinian talks, led by France, but Abbas told MEPs that he could work with the 2002 Arab Peace Initiative, a framework supported and sponsored by the Gulf States.

But Kantor said Abbas’s refusal to meet Rivlin showed that the Palestinian leader was himself “one of the biggest obstacles to peace” and not serious about restarting discussions.

“In one short speech, Abbas reminded the world that he has no interest in peace, continues to incite against Jews and Israel and uses the understandable fear of terrorism to rail against Israel and score political points… The only question that remains is about the reaction of the international community to such a malicious and malevolent speech.”