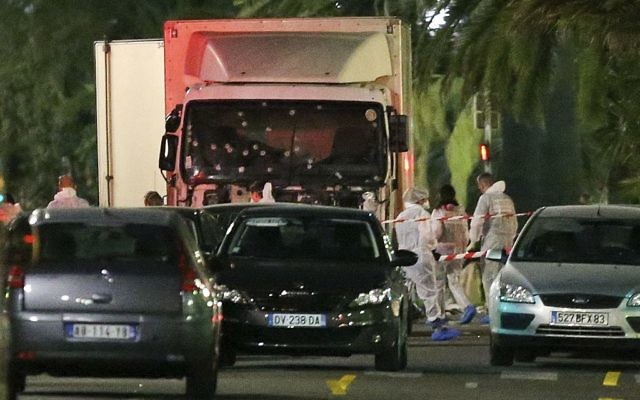 As least 84 people, including several children, have died after a terrorist drove a truck through crowds celebrating Bastille Day in Nice.

Eyewitnesses said the killer swerved from side to side to kill as many people as possible as he drove for hundreds of metres along the Promenade des Anglais on the seafront of the city in the south of France.

One witness said the attacker also produced a gun before being shot by police.

French President Francois Hollande said the country’s state of emergency would be extended for another three months, French media reported that the killer was known to police but for petty crime, not terrorism.

Mr Hollande led a wave of condemnation from world leaders, saying: “France has been hit by a tragedy once again. This monstrosity of using a lorry to deliberately kill people, many people, who only came out to celebrate their national day.

“France is in tears. It is hurting but it is strong, and she will be strong, always stronger than the fanatics who wish to hurt us.”

He also said a military operation was in place which would allow the mobilisation of 10,000 troops and that police from across the country would be called to assist their colleagues in Nice.

The European Jewish Congress (EJC) expresses its outrage and sadness at the attack. “It is difficult to express our pain and sadness after yet another terror attack on France,” Dr. Moshe Kantor, President of the EJC, said. “At this time it is vital that we remain resolute in our unity to defeat this scourge of terrorism, because we know it will not falter, nor desist, from its murderous ideology.” “Together, we stand with President Hollande, the French Government and all the people of France as they mourn their loved ones and tend to their injured after yet another senseless attack on those celebrating on the Promenade des Anglais.”

The Community Security Trust told Jewish News: “Sadly this confirms, yet again, that the need for stringent security measures will need to continue for the foreseeable future. We have always stressed the need for crowds to disperse, for example after busy synagogue services and this tragically demonstrates why.”

UK Chief Rabbi Ephraim Mirvis posted on Facebook: “Shocked to hear about yet another incident bringing horrific loss of life to many in France. Our prayers are with the people of Nice.”

On Twitter, the Board of Deputies of British Jews wrote: “Our thoughts once again go out to the victims and families after another appalling terrorist attack.”

The United Synagogue said: “We are shocked & saddened to hear about the terrorist attack in Nice. Our thoughts and prayers are with those affected by this horrific act.”

Liberal Judaism issued a statement in which they said: “We stand with the people of France and all those who suffer at the hands of the tyranny of terrorism”

New Foreign Secretary Boris Johnson tweeted that he was “shocked and saddened by the appalling events in Nice, and the terrible loss of life”.

A spokesperson from Orthodox group Chabad identified a wounded victim as Moshe ben Yaakov. “Counselors for Chabad’s Gan Israel day camp were also at the scene of the attack, having apparently crossed the street just moments beforehand, they narrowly missed the truck’s path of destruction,” said Rabbi Motti Seligson, according to Times of Israel.

They report that five Jewish residents of Nice were injured in the attack, with Israeli officials claiming none of their citizens are thought to have been hurt.