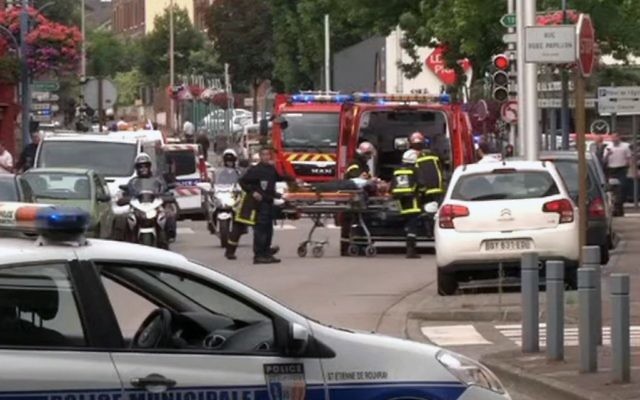 A member of the congregation was seriously injured during the attack in Saint-Etienne-du-Rouvray, south of Rouen, Normandy.

Rabbi Mirvis wrote that the “attack in Normandy [was] a despicable desecration of the sanctity of human life in a place of peaceful worship.”

Board of Deputies of British Jews Senior Vice President Richard Verber said: “This callous murder of a priest in France in the name of a twisted ideology is an attack on all of us. The murder of a defenceless 84-year-old, a man who had dedicated his life to his community and was going about his own business is beyond disturbing.”

“This dastardly attack will only strengthen our resolve to defeat the enemy of Islamist terrorism.”

World Jewish Congress president Ronald Lauder called the attack “a monstrous and evil act of murder committed against innocent people inside a house of worship.”

He added that it “is not a war between religions, but between good and evil. We must stand as one in the face of this great threat.”

Israel’s President Rivlin said: “This attack shows the true face of the brutal nature and the horror of terrorism. The whole free world must understand that our values are under attack.”

He added: “Israel stands side by side with the people of France, and we send our thoughts and prayers to the victims and their families.”

Pope Francis expressed “sorrow and horror” after the attack, and was amongst world leaders who have paid tribute to the victims.

The Vatican said in a statement: “We are particularly struck because this horrible violence has occurred in a church – a sacred place where we pronounce God’s love – with the barbaric murder of a priest and worshippers affected.”

French president Francois Hollande, travelled to the site of the violence with interior minister Bernard Cazeneuve as forensic officers began their investigations.

In a tweet addressed “to the families of the victims and all Catholics in France”, President Hollande offered “solidarity and compassion”.

The Archbishop of Canterbury Justin Welby said: “Evil attacks the weakest.. Pray for France, for victims, for their communities.”

French prime minister Manuel Valls said in a message on Twitter: “All of France and all Catholics are bruised. We stand together.”