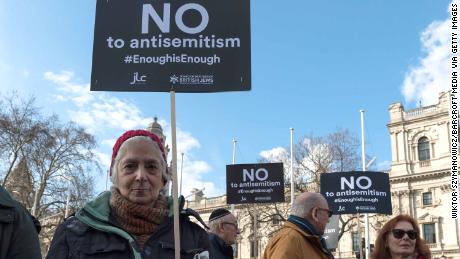 An 11% increase in anti-Semitic incidents has been recorded in the UK during the first six months of this year, compared to the same period in 2015.

According to the Jewish charity Community Security Trust, a total 557 cases of malicious acts were recorded. This was the second highest ever recorded during a January-June period.

As reported by The Guardian, the charity did not identify any obvious trigger for the increase. Two years ago, for instance, the war in Gaza led to a big rise in antisemitic incidents in the UK.

This year, the biggest increases were recorded in April, May and June – months when antisemitism in the Labour party was the subject of widespread media coverage. Racism and xenophobia were part of the campaign discourse in run-up to the EU referendum on June 23, reported The Guardian.

The most common type of incident recorded involved verbal abuse of Jews in public. Other types of antisemitism included graffiti, abuse via social media, threats, damage and desecration of Jewish property and leaflets.

“I condemn the deplorable rise in antisemitic hate incidents in the first half of this year and will continue to work with law enforcement partners and with the Jewish community to ensure their safety and security,” said the UK’s home secretary, Amber Rudd.

Andy Burnham, shadow home secretary and campaigning to be Labour’s candidate in the Manchester mayoral election, said: “Labour will always lead the way in tackling any form of hatred or prejudice but we are being hampered in that fight by a small number who are not welcome in our party.”

John Mann, chair of the all-party parliamentary group on antisemitism, noted that the rise in incidents is “worrying”. He said: “The message should go out to everyone that we will not stand for antisemitism, perpetrators of hate crimes against Jews will be caught and prosecuted and the bystanders must be educated. Britain should expect better than this.”

Moshe Kantor, president of the European Jewish Congress, said: “The worrying increase of antisemitic hate incidents in the UK once again highlights our need to unite throughout Europe to stamp out intolerance. We have seen time and time again that the UK is not immune from the Europe-wide trend of increased hate and violence against minorities. More must be done by the British leaders to protect their Jewish communities.”