It’s A Mockery’: Fury As Hate Preacher Anjem Choudary Gets Half The Maximum Jail Term And Will Walk Free In Two And A Half Years – With His Supporters Chanting ‘Allahu Akbar’ At The News 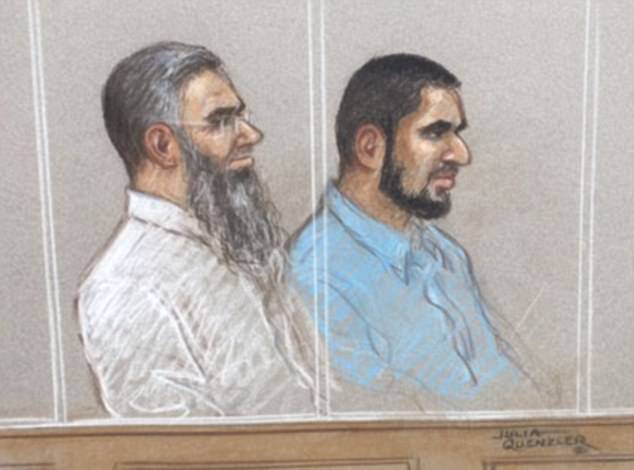 The cleric was found guilty of encouraging support for ISIS and urging his followers to join the terror group in a series of incendiary lectures on YouTube.

His supporters shouted ‘Allahu Akbar’, meaning ‘God is great’, today as his sentence was announced in an Old Bailey courtroom.

But there was anger this afternoon that the sentence means Choudary – who will be entitled to automatic release after serving half of his term – could be back on the streets within two and a half years.

Fears have been raised that Choudary may now attempt to radicalise fellow prisoners. He could be sent to Belmarsh maximum security prison in south east London which is home to a number of convicted terrorists and has been called a ‘jihadi training camp’.

Professor Anthony Glees, a security expert at Buckingham University, called for the government to force a review of the jail term.

Prof Glees said: ‘In my view the sentence is far too lenient, mocks justice and will horrify the families of those whose loved ones followed his call to fight for Daesh [ISIS].

‘This is a highly dangerous, sinister and wicked person from whom we have a right to be protected for a very long time. Once again an English court has delivered a soft verdict which is no deterrent.

‘He’ll be out in two-and-half years and there’s no reason to believe prison can reform him or make him see how appalling his recruitment of young Brits had been.’

Dr Alan Mendoza, executive director of anti-extremism think-tank The Henry Jackson Society, said: ‘It’s a little surprising that Anjem Choudary received a relatively light sentence – given that since 1999, 10 per cent of those jailed for Islamist terrorist crimes had personal contact with him, and at least 23 per cent were connected to his banned group al-Muhajiroun.

‘It would surely have made sense for the extent of his influence to be taken into account.’

Nick Lowles, spokesman for anti-terror campaign group Hope Not Hate, added: ‘Too many people have under-estimated how dangerous Choudary is. He is the single most dangerous extremist to have operated in the UK for the last 20 years – and we should celebrate his imprisonment.’

Haras Rafiq, from counter-extremism group the Quilliam Foundation, told the Evening Standard: ‘He has got five-and-a-half years for 15 years of radicalising youngsters in Britain and beyond towards jihadist terrorism. This is a sad indictment of the current state of our legislation.’

Judge Mr Justice Holroyde said the pair had influence over impressionable people at a crucial time when Muslims were looking for guidance on how to respond to the rise of ISIS.

He told Choudary: ‘You did nothing to condemn any aspect of what ISIS was doing at the time. In that way you indirectly encouraged violent terrorist activity.’

Despite his ideas spawning a generation of home-grown terrorists and enraging the British public, Choudary had previously thwarted authorities by managing to stay on the right side of the law.

But a pledge of allegiance posted online provided a turning point for police who swooped to arrest British-born Choudary and his deputy Mohammed Mizanur Rahman.

Rahman, who was described as a ‘hothead’ by the judge, was also given a sentence of five years and six months today.

The maximum possible jail term they could have faced was 10 years. Choudary has already served 140 days behind bars.

The judge said both men were ‘dangerous’ and had shown no remorse for what they had done.

Choudary’s barrister even tried to argue that he should receive a shorter sentence because of the likelihood that he will spend much of it in solitary to prevent him radicalising other inmates.

Mark Summers QC claimed that such treatment would have ‘psychologically profound negative effects’ but he was slapped down by judge Mr Justice Holroyde, who told Choudary: ‘It would not be right to reduce your sentence because of the possibility that your own behaviour may cause the Prison Service to deal with you in a particular way.’

Their trial heard Choudary swore an oath of allegiance to ISIS leader Abu Bakr al-Baghdadi in an East London pub after the so-called ‘caliphate’ was declared in the Middle East.

He and his deputy then pressed upon Muslims their supposed obligation to ‘make hijrah’, meaning to travel to ISIS-occupied lands, the court heard.

Choudary, now 49, rose to notoriety as the mouthpiece of Omar Bakri Mohammed – a Syrian extremist who founded the banned extremist group al-Muhajiroun (ALM).

Choudary courted publicity by voicing controversial views on Sharia law, while building up a following of thousands through social media, demonstrations and lectures around the world.

In one speech in March 2013, Choudary, from Ilford, north-east London, set out his ambitions for the Muslim faith to ‘dominate the whole world’.

He said: ‘Next time when your child is at school and the teacher says, “What do you want when you grow up? What is your ambition?”, they should say,”To dominate the whole world by Islam, including Britain – that is my ambition”.’

Shortly after the announcement of the caliphate, Choudary held a meeting with his closest aides at a curry house in Mile End Road in east London to discuss it.

Before accepting it was legitimate, he also consulted his ‘spiritual guide’, Bakri Mohammed, currently in jail in Lebanon, and Mohammed Fachry, the head of ALM in Indonesia.

On July 7, 2014, the trio’s names appeared alongside Rahman’s on the oath posted on the internet, which stated the Muhajiroun had ‘affirmed’ the legitimacy of the ‘proclaimed Islamic Caliphate State’.

The defendants followed up by posting on YouTube a series of lectures on the caliphate, which Choudary promoted to more than 32,000 Twitter followers.

The married father-of-five denied encouraging his followers to back the terror group and insisted the oath had been made without his knowledge.

He said of the pledge: ‘It is completely unnecessary. For the rest of the Muslims it is obedience from the heart.’

Despite protesting his innocence, he continued to express extreme views, refusing to denounce the execution of journalist James Foley by so-called Jihadi John, aka Mohammed Emwazi, in Syria in 2014.

He told the jury: ‘If you took an objective view, there are circumstances where someone could be punished.’

Following the convictions, Commander Dean Haydon, head of Scotland Yard’s counter-terrorism command, said: ‘These men have stayed just within the law for many years.

‘But there is no-one within the counter-terrorism world that has any doubts of the influence that they have had, the hate they have spread and the people that they have encouraged to join terrorist organisations.’

Commander Haydon added: ‘Over and over again we have seen people on trial for the most serious offences who have attended lectures or speeches given by these men.

‘The oath of allegiance was a turning point for the police – at last we had the evidence that they had stepped over the line and we could prove they supported Isis.’

Choudary’s conviction was also welcomed by leading British Muslims, who condemned his ‘evil’ and ‘hateful’ views.

‘He must not be allowed to spread hate in jail’

Fears have been raised that Choudary may now attempt to radicalise fellow prisoners.

Choudary could be sent to Belmarsh maximum security prison in south east London which is home to a number of convicted terrorists.

Dr Moshe Kantor, President of the European Council on Tolerance and Reconciliation, called for controls to stop him influencing others.

He said: ‘We must ensure we maintain momentum and commit to combating radicalism with tougher legislation.

‘Today’s result is a positive step in fighting extremism, but it is essential that Choudary is not able to continue to radicalise others while in prison and we must address the broader risks of radicalisation within the prison system.’