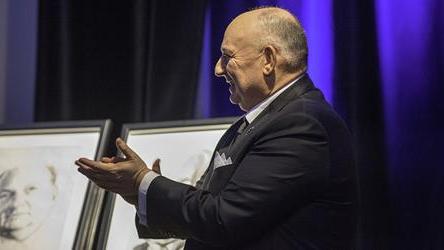 Dr Moshe Kantor, the president of the European Jewish Congress, has gained three new pictures for his collection: portraits of him drawn by pupils from Kantor King Solomon High School in Ilford.

They were presented to him last week at a celebration to mark his investment in the United Synagogue school and its renaming after him.

The school had chosen some of its best young artists to draw him and planned to give him the best.

But it couldn’t choose between the portraits by Ellis Lilley, Petra Marjanovics and Hannah Chapman, so it decided to present him with all three.

The art-loving benefactor – whose largesse among other things will provide a laptop for every sixth-former – will have to wait, however, to take the gifts home as they form part of the students’ GCSE portfolio.

Tolerance is a natural component of Judaism

Tolerance, he said, was “a natural component of Judaism”, which did not seek to enforce its religion on others and believed those of other faiths could find a place in heaven.

“I am very proud that the Kantor King Solomon has taken this principle to heart and I am thrilled to help the school on its future journey,” he said.

KKS was recently ranked 136th out of more than 6,000 state schools in England for its “Progress 8” score, which measures the academic progress pupils have made since they arrived.

The school’s multi-faith make-up was evident from its choir, who sang its new school song in Hebrew and English, an arrangement of Hillel’s famous saying “If I am not for myself”, by music teacher Chayah Abraham.

Daniel Lewis-Green, deputy head boy, who was among those attending the event, said the presence of pupils from other faiths made KKS “a different environment from any other Jewish school in London and it prepares for you in the wider world to learn about other people’s views”. He “wouldn’t change a thing”, he said.

Justine Parillon, 17, a Seventh Day Adventist, said she “loves learning about Jewish history and beliefs” and finding similarities with her own faith.

She has enjoyed her Jewish studies so much she is taking it for A-level.