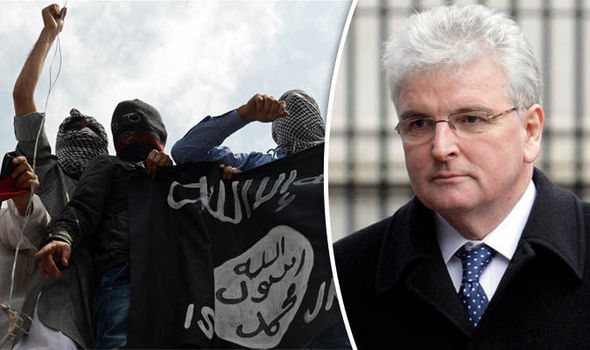 Terror groups including Islamic State are trying to get their hands on radioactive material to make a nuclear “dirty bomb”, former Defence Secretary Lord Browne.

The bomb could contaminate large areas and cause deadly illnesses such as cancer.

At the same time a Russian expert warned that America and Russia are in danger of triggering an “uncontrolled arms race” by failing to negotiate over nuclear weapons.

The stark warnings were issued at a London conference of the International Luxembourg Forum on Preventing Nuclear catastrophe.

Lord Browne said terrorists are working to get the components needed for a crude dirty bomb.

Radioactive materials such as caesium-137, cobalt-60 and iridium-192 are widely used in hospitals around the world, often as part of life-saving treatments.

But they could also be mixed with explosives to create a dirty bomb.

Lord Browne, vice chairman of the Nuclear Threat Initiative, said that when IS captured Mosul in 2014 it claimed to have taken caesium from hospitals.

He said: “I do not know if that was true but the fact that they said it reveals that they know the terror threat that it poses.”

He added: “There is significant intelligence that terrorists around the world know these materials exist, know where they are and have been making efforts to get them.

“In a terrorist investigation in Norway the authorities discovered that the person of interested wanted to do this. Norway acted immediately by removing the material from hospitals.

“I don’t think there’s an intelligence brief in the world that does not suggest that a dirty bomb is not a threat or that terrorists have not expressed a desire to get their hands on the material.”

An NTI briefing says that a radioactive dirty bomb “could cause significant short-and long-term health problems for those in the area and could leave billions of dollars in damage due to the costs of evacuation, relocation and cleanup”.

It added: “Buildings would have to be demolished and debris removed. Access to a contaminated area could be limited for years.”

It added that the radioactive materials needed can be found at thousands of sites in more than 100 countries.

It said: “Many of them are poorly secured, particularly during transport when they are vulnerable to theft.”

Meanwhile the president of the Luxembourg Forum, Russian oligarch Dr Moshe Kantor, said the Treaty on the Non-Proliferation of Nuclear Weapons is “threatened” by North Korea’s arms programme.

He added: “The lack of progress in negotiations between Russia and the US on reduction of nuclear arsenals may lead to an uncontrolled arms race.”